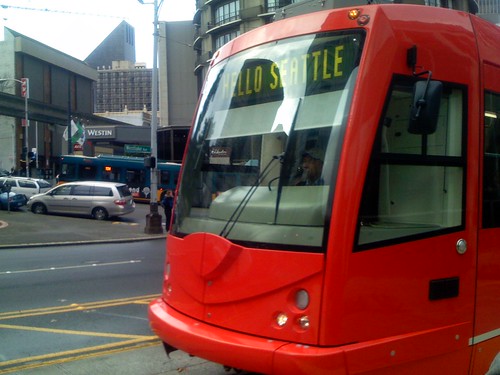 Via the Seattle PI, this spring the city of Seattle will be studying 6 potential routes for new streetcars, each of which would start downtown and reach out to other neighborhoods.

One of those would serve the west edge of the Central District, traveling up Jackson, north on 12th Ave, and then over to Broadway and Capitol Hill. The exact route will be evaluated in the study, which is due to be completed by May 1st.

Sound Transit had previously evaluated trolley routes going into the CD, including one that went up Jackson to 23rd Ave. But that one in particular had poor ridership estimates that kept it from getting any further in the process.

IMHO, the real focus should be on the corridor that the #3 and #4 busses serve. Those are almost always standing room only before they even get to downtown. Too bad we no longer have the James Street Cable Car.

0 thoughts on “City to Study Streetcar Route in the CD”