There’s been a very bad car wreck at MLK & Jefferson this morning at 8:40am. Three people have been taken to Harborview, including 2 young kids. People at the scene tell me that the driver might not make it.

Traffic is blocked in both directions on MLK, and will likely stay that way for a while as the investigation continues.

Update:
The driver of one vehicle, a large white Ford F-350 towing a construction trailer, told me that he was on his way to work, driving southbound on MLK, when the other vehicle, a blue two-door car driven by a father with his two daughters on board, turned into his lane. Seattle Fire crews had to rip off the roof of the car to extract its occupants. Seattle Police spokesperson Renee Witt said that the driver of the car was taken to Harborview with life-threatening injuries. He was later pronounced dead at Harborview. The youngest daughter was in serious but stable condition. The oldest daughter had only minor injuries but was taken to Harborview for evaluation. Friends of the father said he was taking his girls to school at the time of the accident.

Update x2: Video added. One more video with details from police spokesperson is on its way.

Update x3: 12:24pm – Police are opening up northbound traffic on MLK. Southbound will be closed pending cleanup from SDOT crews.

Update x4: 12:58pm – All directions of MLK are now open to traffic. And our second video with a statement from an SPD spokeswoman is now available above. 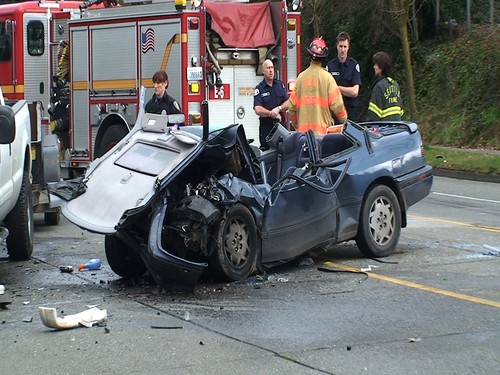