Seattle Police were called out to the 700 block of 26th Ave today at just before 4pm to what was initially described as a domestic disturbance, possibly involving a stabbing. After a major response involving numerous officers and medics, only minor injuries were found on one of the instigators in the event.

The situation started when a man and his girlfriend got into a fight with the man’s wife. The fight escalated and got physical, and at one point the man and girlfriend brandished a kitchen knife and some sort of spear. The wife managed to escape the situation and sought shelter at a neighbor’s residence.

The husband and girlfriend were taken into custody and will be booked in the King County Jail for felony domestic violence assault and felony harassment. The only injury was to the husband, who suffered minor abrasions to his face in the course of the fight.

Interestingly, the apartment involved in this situation is the same one that was connected to the sword-wielding woman event in October 2007. Police couldn’t confirm whether any of the parties in today’s event were involved in the sword incident. 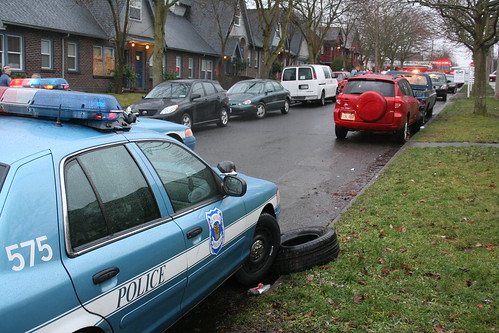