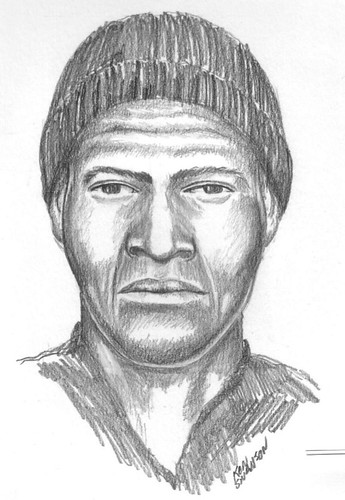 On January 13th a teacher at Adams Elementary in Ballard was seriously hurt in an assault that took place at a bus stop in the 300 block of E. Pine on Capitol Hill. The victim was calling 911 to assist a female who was being harassed by the suspect when the suspect hit him from behind, causing the victim to fall and hit his head on the ground. He’s still in the hospital and could have permanent brain injury due to the attack.

Today the Seattle Police department released a sketch of the suspect in the crime. The suspect is described as:

A black male in his late 40’s. He is described as between 5’9″ to 6′ tall, 150 pounds, with a slim build. He has been described as having a “wrinkled face” He was last seen wearing a black knit ski cap, black thigh length coat with a 1-2″ white stripe down the length of the sleeve. He may have been wearing a black velvet sweat suit and was carrying a large black backpack. He may also be wearing gold rings and/or bracelets.

If you have any information on the suspect or other details of the incident, call the Homicide Unit at 206-684-5550.