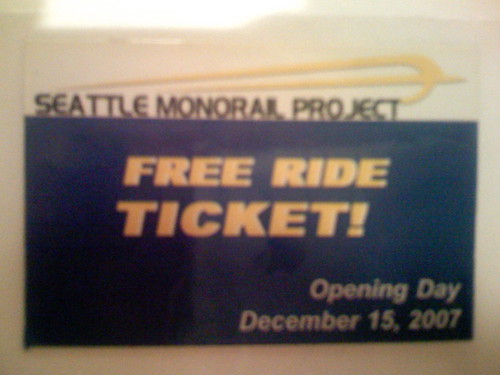 Today I had to go downtown to buy a few more made-in-China gifts for Christmas, and after the obligatory stop at Macy’s where shoppers were packed at shoulder-to-shoulder levels, I still needed to pick up a few things over in South Lake Union.

So I walked a block east to Westlake and took my first ride on the new SLUT. I’ve been a bus rider for years, have voted for every transit option that’s ever been on the ballot, and did a lot of campaigning for the monorail (which we were supposed to have been taking the inaugural ride on today using our “Free Ride Ticket” magnets, sigh), but I’ve always been very skeptical of at-grade rail projects. It’s just never made much sense to invest that much capital in transit that would be just as slow as a bus, stuck in traffic with everyone else.

However, I’m happy to say that I was pleasantly surprised with Paul Allen’s new trolley. Apart from the general newness and shinyness, it’s got several big advantages over a bus. First of all, it’s big, with as many seats as a normal bus and much more room for people to stand. If you’ve ever been on the #3 bus during rush hour, you know that buses weren’t really designed for standing passengers, because once the aisle fills up it becomes impossible for anyone else to get on or off. But the wide floor and numerous wide doors of the trolley makes a bus seem like a sub-compact car. There’s plenty of room for people to pack in, and still let passengers easily get on and off.

Another advantage is that the trolley has huge windows and a generally airy feeling. It’s a totally different experience from the dark, tinted interior of a Metro bus. And the quality of the ride was much smoother than I had anticipated.

But the most interesting part was that everyone on the trolley looked kinda happy to be there – something I’ve never seen on a bus. Sure it’s still a novelty, but I’ve seen a lot of brand new buses full of people wishing they were somewhere else.

My ride from end-to-end took 15 minutes. It seemed like the city has done a good job integrating it with the traffic signals, as we never waited for more than a couple seconds at any light. And although people have complained that it’s slow, my ride was equally as fast as a city bus. For example, my trip back on the #8 took 18 minutes to go 1.2 miles, a bit longer than it took the trolley to travel its 1.3 mile route.

But that bus trip proved one of the biggest advantages of fixed rail over buses: route certainty. I had no idea that the #8 bus I caught was only going to make half of the route, and I ended up getting rudely kicked out on Capitol Hill with 15 blocks left to walk home in the rain. It’s those kinds of details that give all forms of rail transit an advantage over their inbred rubber-tired cousins.

Once upon a time, the CD was connected to every other part of the city with a comprehensive trolley system. There was even a giant trolley barn at 14th & Jefferson where the Seattle U athletic field now sits. And while I doubt that we’ll ever get a fast subway or elevated train station in the neighborhood, now I’m hoping that someday we’ll be able to upgrade our crowded buses to nice, clean streetcars.