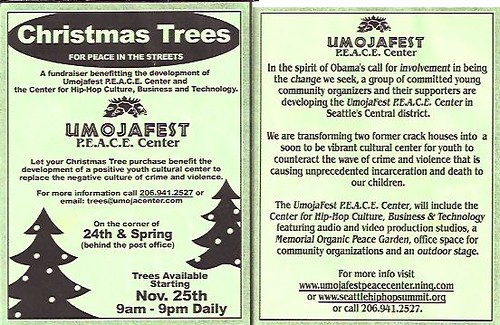 Trees are being sold behind the post office (24th and Spring) to benefit Umojafest. So, if anyone was thinking of getting a tree this year (or donating one for a family), come check it out.

SUMMARY (2/14/08): Didn’t think to do this before, but in case some folks don’t want to mess with downloading the mp3 or dealing with a constantly buffering stream.

According to Lt. Wilson, the general perception is that criminal street gangs are on the rise all across the state. Because Seattle lacked a definition for “gang” and “gang crime.” Seattle hasn’t been tracking gang activity or gang crime. Thus, there is no data to show that there has been an actual rise in gang activity. Anecdotally, Wilson sees a rise in the last two years over the previous two years.

The state”s definition for a gang is the rather broad definition cdguy noted. Northwest gangs are more ecumenical than most. If a person shares in the gang’s philosophical outlook, then the person can be accepted into the gang regardless of ethnicity or race. There is a tendency for violent crime: home invasion robberies, carjacking, and assault.

Youth against youth violence is on the rise, whether gang-associated. So, youth violence needs to be addressed, whether gang-associated. According to Wilson, Seattle won’t be able to “arrest its way out of the situation.” While law enforcement is part of the response, addressing this problem needs to be a collaborative effort with police and the community, parents, schools, and churches.

Andre Franklin and Larry Bennett are seeing a rise in gang activity. They identify the main causes of this rise to the fact that these youth are hurting, have low self-esteem, and are faced with a lack of realistic options. Gang affiliation is, for some, the only option that offers them a source of (or substitute for) self-esteem, a sense of belonging, and a basis for trust.

Much of their work involves providing a positive, safe, welcoming environment. Late night basketball programs, for example, are successful because the kids like basketball and are thus drawn into the same gym even when they may be engaged in turf rivalries outside of the gym. Franklin used his late night basketball to attract kids into a basketball league, to which he plans on incorporating programs that will provide job and life skills training.

Victor Rios (Sociology, UC-Santa Barbara) provides a broader perspective. He attributes rises in gang activity to society’s apathy for youth. He then appealed to Maslow’s hierarchy. Rios himself got out of his gang when his probation officer introduced him to a mentor who was able to connect to Rios. One of his teachers also supported him by being there for Rios. When he was ready for it, she introduced him to various programs that existed for at-risk youth. Rios was thus able to go from being a gang member and three-time juvie resident at age fifteen to college applicant at age seventeen.