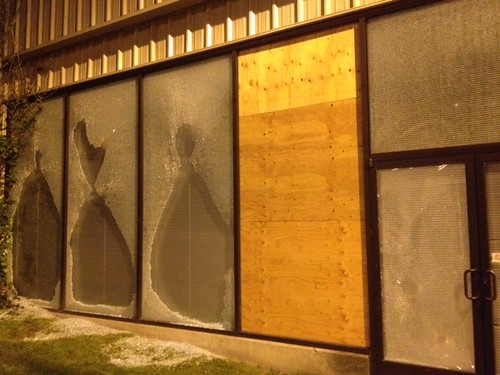 I work at a business on the 1600 block of South Jackson. Just wanted to pass along that our windows on the street have been broken out 3 different times in the past 4 weeks.

The first happened over Easter weekend, what appears to be a BB pellet hit and shattered the outer pane of one of our windows.

The second occurred the following weekend, when someone shattered the inner pane of the same window, breaking it out completely, as well as hitting our glass door with another BB pellet.

The third came last night, when four of our windows were broken out, sometime between 10:00pm and 1:00am. This time it appears to be a blunt object that struck three windows, with two pellet impacts on another window above our door.

I know that a business up the street has been hit a couple weeks ago, as well.

Nobody’s entered the building, nothing’s been taken, but it’s getting pretty frustrating, having to clean up broken glass week after week. I just want to send a note to those in the area to be watchful, and also to see if anyone else has been having this problem.