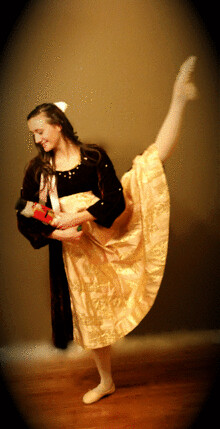 Join us for our Santa breakfast and take in The Nutcracker: This season DASSdance rings in the holidays with a traditional spirit.  Meet Santa Claus while DASSdance professionals and kids perform the story of The Nutcracker.

Complete with a delicious continental breakfast, door prizes, Twisted Fun Balloon Magic, and pictures with Santa and the Nutcracker characters, this new addition to the local holiday line-up will please, inspire, and leap into your heart.

Wax On Spa and DASSdance present the November 2012 Salon de DASSdance, featuring new choreography from The New Animals and DASSdancers, original artwork from Bonnie Wilkins, and music from Autumn Electric. Led by choreographer Markeith Wiley, The New Animals will bring their inner-animals to the stage with their wild hip-hop-meets-modern movement, while DASSdance will debut duets from the 2012-2013 season’s performance project about the “lost tribes” of the Amazon Rainforest, Tale of Ten Green. The layered, naturalistic monotype of Bonnie Wilkins’s opening of Beauty, Elegance, and Intrigue will provide an organic backdrop for the evening followed by the folksy psychedlic sounds of Seattle-based band Autumn Electric.

Salon de DASSdance is held on the first Monday of every month to bring together local performance and visual artists and musicians. This month’s Salon is scheduled for Monday, November 5, 2012 at Washington Hall (153 14

th Ave, Seattle 98122). Art opening and hors d’ouevres at 7pm; dance at 8pm; and music at 9pm. Cover is free with donations accepted. Bar is cash or credit.