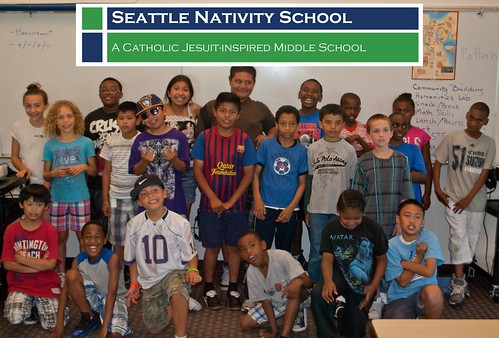 Please join us Thursday, October 11th from 6:00-7:30pm for appetizers and drinks to celebrate the progress of the Seattle Nativity School, a Catholic Jesuit-inspired, STEM (Science, Technology, Engineering, & Math) middle school, bringing hope, opportunity, and dignity to underserved communities in Seattle.  We will share our feasibility work, our educational and development successes thus far, our vision for the future, and how to get involved.

A big thanks to our co-sponsors: Seattle University, Seattle Preparatory School and St. Joseph School.

To learn more about the Nativity School model, STEM education and our progress so far check out our website!  You can also follow us on Facebook, Twitter, and over on our Rally Fundraising page. Rest assured, there will be no “ask” on October 11th.  Please feel free to forward this to a friend (or many friends) and bring them along!

Thanks, and we look forward to seeing you there!

The Seattle Nativity School is currently undergoing a Feasibility Study to assess the viability of a Nativity model Catholic Jesuit-inspired middle school in the Seattle community.  We are projecting an opening for September 2013, pending approval of the study from the Archdiocese of Seattle and Oregon Province of the Society of Jesus. 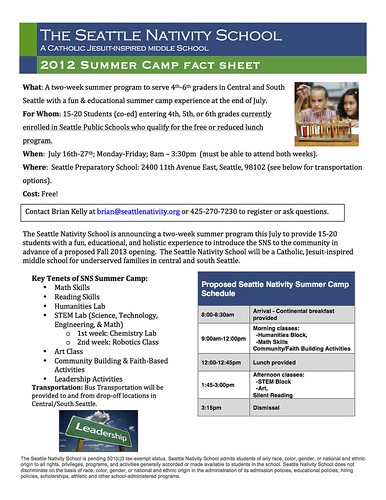 Do you know a student entering 4th, 5th, or 6th grade who might qualify for the Seattle Nativity School Summer Camp? Spots are still available for the 2-week program from July 16th-27th!

What: A two-week summer program to serve 4th-6th graders in Central and South Seattle with a fun & educational summer camp experience at the end of July.

For Whom: 15-20 Students (co-ed) entering 4th, 5th, or 6th grades currently enrolled in Public Schools who qualify for the free or reduced lunch program.

The Seattle Nativity School is currently undergoing a Feasibility Study to assess the viability of a Nativity model Catholic Jesuit-inspired middle school in the Seattle community.  We are projecting an opening for September 2013, pending approval of the study from the Archdiocese of Seattle and Oregon Province of the Society of Jesus, and NativityMiguel Network.  We are conducting exploratory efforts to assess the need and desire for a Seattle Nativity School through community outreach.

A Feasibility Study is currently underway to explore the opening of The Seattle Nativity School, (www.seattlenativity.org) a tuition-free, faith-based Catholic middle school here in Seattle’s Central District.  The school will operate under the NativityMiguel model, as part of a network of over 60 existing schools in over 20 states across the US & Canada.

The first Nativity School was founded on the Lower East Side of Manhattan in 1971 in response to an observation by local Jesuit priests that young Latino boys were struggling to keep up with their peers academically. So the Jesuits established the Nativity Mission Center, which kept local kids in school for extended hours, and away from dangerous influences in the neighborhood.  They provided a rigorous and holistic curriculum, wrapped in an environment of support. Those at the school became the student’s ‘family.’

Since then, Nativity middle schools have spread across the United States, serving grades 5th through 8th at 60 schools in over 20 states.  These schools offer a non-tuition-based, extended day, extended year education that is augmented by a graduate support system.  The average student enters a Nativity school often achieving one or two years below grade level in standardized tests.  By graduation day, he or she is prepared to succeed in the elite local public and private high schools, with the ultimate goal of attending university.  The approach has been successful in graduating students from high school and college at rates 20-30% higher than their peer groups in public schools.

In Seattle, we have diverse communities in need who are challenged to find the type of holistic support – spiritual, educational and emotional – that is required for them to break the cycle of poverty. The Seattle Nativity School is in the process of understanding the need and interest level here in the Central District and South Seattle.  The Feasibility Committee is conducting community & family surveys as well as holding information sessions; the next session will be at the Douglas-Truth library branch (23rd/Yesler) on April 12th from 6:00-7:30pm or on April 14th, at the Beacon Hill Library Branch from 4:15-5:45pm. All are welcome, especially interested families with grade school aged children.

Pending approval of the Feasibility Study, the Seattle Nativity School is seeking co-sponsorship by the Archdiocese of Seattle and Jesuits of the Oregon Province.  Seattle Nativity is targeting to open its doors in September of 2012 with the inaugural class of 5th graders – 10 boys and 10 girls.  This established educational model is grounded in social justice, hope and providing opportunity.

Read more at the Seattle Nativity School website, Rally & Facebook page, or come see what this school is all about at an upcoming info session.