Tonight I enjoyed a really superior film-watching experience, and it happened at our very own Central Cinema at 21st & Union.  Tonight was the first night of the STIFF Independent Film Festival, a less-glossy and more truly “independent” version of the SIFF festival.

Playing tonight was a film titled The Call, an 85 minute sports documentary about a small-town football agent who shepherds three clients toward the 2008 NFL Draft.  Tonight was literally the second showing ever of the film.  The Call was shot with one camera in ten cities over five months and delivers an intersecting set of narratives about a group of highly-motivated people who form a tight bond as they push themselves through injury and marital conflict in the hope of grabbing the brass ring.

The beginning of the film apparently includes a short Flash-based animation but I missed that because I showed up late.  Or maybe the animation was a short film that showed before The Call.  Either way I can’t say whether viewing the animation would make your experience of the film different than mine.

Anyway, The Call was a great experience for two reasons.

First, even though I don’t follow team sports AT ALL, I find stories of personal struggle, achievement, and redemption to be very compelling.  The sporting world is full of these stories, and thinking back on some of the sports-themed films I’ve seen (my favorite of which is Breaking Away), I don’t think they deliver the visceral experience one gets from observing the trials of a first-class athlete who is struggling to make it to the very top.  When I read these stories I try to see myself in them.  These stories motivate me to improve my attitude and to push myself to achieve more in my life.  The Call tells four such stories – three from the players and one from Joe, the players’ agent.

The second reason the STIFF showing of this film was such a great experience came as a total surprise.  Because I had wandered in late, I didn’t realize that along with the film’s producer and director, the audience included Joe, the agent depicted in the film, Owen Schmitt of the Seahawks, and his mother.  There was a brief Q&A with these folks at the end of the film.

The audience was maybe 25 people for the 7pm showing.  To watch a film about one of my favorite themes and then be a part of an intimate Q&A was a really neat experience for me.  The Q&A opened by eyes to how independent film can contribute to culture by breaking down traditional barriers between filmmakers and their subjects, and the audience.  I wanted to ask the director how he thought this kind of documentary compares with reality television competition shows but they had to clear out for the late showing of the film.

The producer is trying to build an audience and distribution for the film, and I wouldn’t be surprised if it gets bought by someone like HBO Pictures.  If you check on hulu.com you’ll find another North American indie film that got its start with private screenings and local film festivals and was subsequently picked up by HBO.  The film is called Cracked Not Broken and it tells the story of a drug-addicted prostitute whose entire existence has shriveled down to simply finding enough money to pay for tomorrow’s hotel room and her next injection and whose family has just about given up on her.  It is an absolutely compelling tale that was filmed by the husband of her best friend from grade school.

I think The Call will do at least as well in distribution because it features subject matter that I think would appeal to a more mainstream audience than Cracked Not Broken.  I had to turn away during a scene in Cracked Not Broken when the hooker is poking around in her arm with a needle trying to find a good vein for shooting up.  Her gritty reality may not be as suitable for prime time as are the wise-cracking college football players featured in The Call.  Then again she got on Oprah, so what do I know?

The Call is showing again at the Jewel Box Theatre (2320 2nd Ave.) on Tuesday, June 9 at 4pm.  If you can get out of work early you should go see the film.  Owen Schmitt plans to be in attendance at the Tuesday showing.  There’s a good bit of foul language in the film so keep that in mind if you’re thinking about bringing the kiddies to get their jerseys autographed.

STIFF runs from June 5 thru 14.  Many STIFF films are playing at Central Cinema.  STIFF doesn’t have any of the famous movies stars or Gucci-sponsored events that SIFF offers, but if you check out the STIFF festival I think you’ll enjoy some great, truly independent films that are showing right here in the CD.  They also sell beer and pizza at Central Cinema and it makes for a pleasant walk on a summer evening.

For the STIFF schedule visit:  http://www.trueindependent.org/ 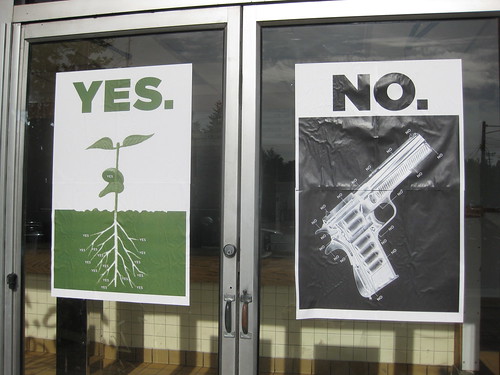 Some “activists” have recently posted provocative signs without the owner’s permission on the Philadelphia Cheesesteak building at 23rd & Union.

I have a couple of problems with this, but first I’ll provide some background.

I discovered this issue when I recently spoke to the representative of the Philadephia Cheesesteak property to ask him to clean up graffiti on the building.  I let him know that someone had plastered large signs featuring the words “YES” and “NO” along with images of a plant sprouting and a handgun.

I have two problems with these signs.

First of all, even though the “activists” may believe they have a compelling message and good intentions, they should have secured permission from the property owner before posting these signs.  Private property rights are fundamental rights that predate the right to free speech.

My other problem regards the content of these signs.

Given the property’s tragic history of gun violence, I personally take issue with any individual or group who posts handgun images on this particular property in order to bring attention to themselves or their ideas.  Who are these “activists” to presume that my neighbors and I need a reminder that gun violence plagues our community?

The neighbors who live around 23rd and Union are humble, anonymous folks.  A few of us went out early last Sunday morning and pulled weeds for an hour at the intersection.  I’ve been calling property owners about cleaning up graffiti.  We each do our little part to try and make the neighborhood better.

I don’t think we deserve to have someone’s provocative “media campaign” shoved down our throats. 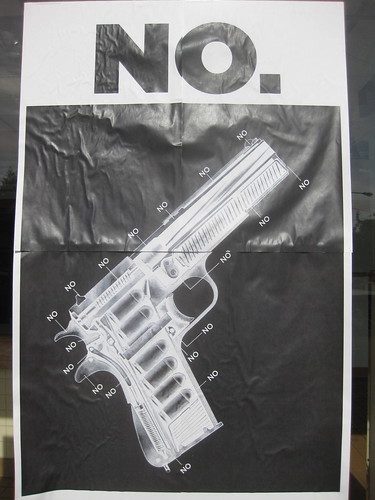 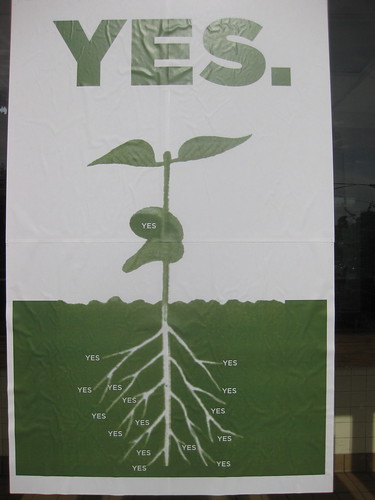 A house in our neighborhood is undergoing foreclosure.  Yesterday, a neighbor saw a new notice posted on the front door of the home and decided to take a look.   It was a water shutoff notice from Seattle Public Utilities.  The homeowner owes $13,000 in unpaid water bills (plus $110 shutoff charge).

I’m wondering why SPU waited so long before turning off the water.  That bill is equivalent to decades worth of normal household water use.