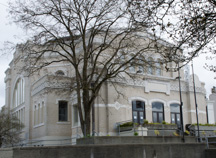 About Anonymous:
Anonymous remembers a time before the blare of TV and the constant roar of cars when the Central Area was a village of small shopkeepers where people gathered together to talk and play as the primary form of shared, joyful entertainment.

Anonymous on the Central Area:

I guess I should start at the beginning. The first Jewish settlers in Seattle were Ashkenazim (Jews of Eastern European or German descent) who arrived in the late 1800s. My family is Sephardic from Turkey (Jews originating from Spain, Portugal or North Africa) my uncles came to Seattle in 1909 and my father joined them in 1911. My mother came after World War One in 1920.

Now, don’t forget it was a different life over in Turkey. When my Dad first came over to America he did shoeshine for a while. A lot of the Turkish men when they first came they did shoe shine and shoe repair. Whatever it took to provide.

The Ashkenazic and Sephardic communities were pretty separate before World War II, we had different synagogues and different traditions and food. There’s a big difference between their practices and ours. After the war, there was intermarriage and we learned their dishes and they learned ours; it was a very rich time.

It was a very Jewish community but we had non-Jewish neighbors that we were very close to and don’t forget there were three churches within a few blocks. We lived around Irish, Italian, Turkish, German and Russian families in one apartment building. Everyone spoke broken English and we spoke Ladino at home. The children were all first generation Americans.

My father really discouraged us from speaking Ladino, ‘We’re in America, we speak English’ which was a point of contention with my mother.

I was a few years old; I remember that apartment and my crib. It was so crowded in that apartment that the crib was against a mirror. I was looking in it while the neighbor women were over. They got together every day for coffee. I overhead them talking about the ‘bogeyman.’ They said, beware there was a burglar, a bogeyman, in the neighborhood. I remember looking into that mirror and seeing the reflection. I was old enough to know that the bogeyman sounded scary.

When I was about three years old, I remember my Mom sent me down the side stairs to the apartment below with a bowl of melon seeds wanted for a recipe. Kids in those days were very capable, they followed orders and they delivered. If they were asked to do something they could handle it.

It was a wonderful neighborhood, very diverse neighborhood; we were surrounded by great neighbors. One neighbor was Swedish, she had lots of cats, too many cats. The lady behind us, her landlord was Chinese, and she had two tenants who were Jewish.

Click here to read the rest of the story.