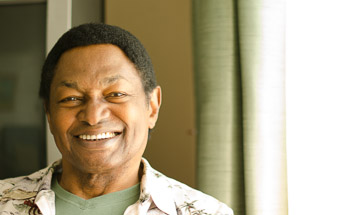 So, you grew up in the Central District?

Let me tell you one story about growing up here. When I came home from school my Dad sent me to get some milk from Poppa’s Grocery (where the Urban League is now). I’m hearing music coming down the street. It sounded really good so I kept walking over there. The music was going, everybody was swinging and clapping; it was wild, wild, wild. There was no air conditioning so the door was thrown open. I just stood there and watched ‘til the song ended thinking, ‘That’s what I want to do with my life!’ Then, this guy came out bumping against the door, stumbled to a car and drove away like he was drunk. I stood there waiting for the music to start up again but there was no music – then people started leaving.

So, the stumbling guy was the music?

That’s right. That was Mike Taylor, a great piano player even now. After a few minutes I peek into the room. Billy Tolles, the boss tenor player, and Tommy Adams are just sitting there on stage, like, what are we going to do now? The piano player was gone. He wasn’t a drunk. He just looked drunk because he had Asiatic ‘flu, and he had been throwing up so he couldn’t stay. Billy Tolles saw me and said, ‘Hey, ain’t you a Holden? Don’t you play?’ And I said, ‘Yeah, I play!’

What was the neighborhood like when you were young?

The neighborhood was very mixed, really integrated around 14th  & Fir. I thought the whole world was like that. There was one guy who was Chinese and he went to war for the Americans that lived in the apartment. He owned the apartment complex that was next to our house on 14th and Fir. He went in the 2nd World War and he came back…Howard was his first name. He also owned Poppa’s Grocery Store on 14th and Yesler. He walked with a limp and he was good to all of us, he was nice and we all bought groceries from him. On the other corner, the southwestern corner of that same intersection was another building owned by another Chinese man.

One of my first jobs was working at his grocery store washing vegetables and fruit to put in the freezer at night. Then my Dad said, “Go out and get a job; go get you a paper route.” So my brother and I went and got paper routes. We didn’t have to make any money, but we had jobs.

You mentioned Bruce Lee lived there. Do you remember what street that was?

In the neighborhood of that time, everybody knew us as the Holdens. Everybody in the whole neighborhood knew my folks because they were musicians and they played in all the places in the Central District.