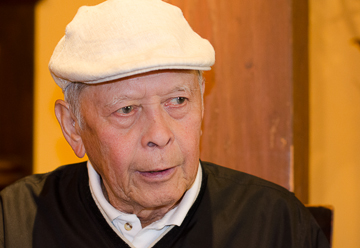 He sparkles with energy, charisma and depth – that very energy allowed him to accomplish real change in Seattle. Growing up in the Central Area of the 1940s with its multi-ethnic communities laid the foundation for him to become an enormously effective community leader.

Bob on the Central Area:

I was born in 1934 in Seattle’s International District (the ID). My Dad was professional prizefighter and my parents lived in the ID in the early 1930s. Then, my mother passed away in 1935. My Dad couldn’t take care of my older brother and I. He was a widower and his fighting career caused him to slowly lose his eyesight due to boxing injuries. Eventually an aunt, my father’s sister, took us in. They lived in the Central Area on 14th & Spruce and later 14th & Columbia.

When my father completely lost his eyesight in 1945, I became his Seeing Eye dog, so I would come down from the Central Area to the NP Hotel in the ID to take care of him. I lived in the Central Area and went to school there. I was running back and forth between the two neighborhoods so I could take care of Dad.

In between, I hung out with kids in the Central Area, mostly at the playground at the old Maryknoll School. That was a missionary school; the sisters came in the 1920s on a mission to convert Asian Americans, Japanese nationals and Japanese-Americans to the Catholic faith. They established the church and school between 16th & 17th Avenues. 90% of us were Japanese and the rest were kids from the neighborhood. I attended Maryknoll Elementary for kindergarten and first grade.

I was in first grade in 1942, when our neighbor kids, the Japanese kids were rounded up and taken to concentration camps first to Puyallup and then Idaho. After that the school then became much more like a community center. The church still operated during the war but the school closed. The Filipino community grew around that church. Initially, it was Japanese and then it became Filipino during the war years.

There were a couple of German families in the church too, the Doedenhoff family and the Schmidt family. We always asked those kids, ‘How come you aren’t in jail? We’re at war with Hitler.’ And no one could give us a reason.

There was no reason except we were different, the Japanese, Chinese and the Filipino. We learned about that difference during the war when our Japanese friends were taken to concentration camps. The Filipino and Chinese kids were always picked on by the white kids, or the black kids, or the Jewish kids. When I lived at 14th & Spruce sometimes I had to get two blocks north to the Immaculate Church School. There were blocks I couldn’t walk down because of these two kids; they were black kids. I still remember who they are. They’re still alive today. Back then, if I passed down their block, they’d beat me up. At that time, all Asians were lumped in with the Japanese, it didn’t matter if you were Filipino or Chinese. It made no difference to them; you were the enemy.

Because we got beat up by the black kids and the other kids then the Filipino kids and the Chinese kids started to stick together, to watch each other’s back. That made it a little safer. But even when we rode the trolleys to go downtown people on the trolleys would yell at the driver, ‘Kick those Japs off the bus!’ So we started wearing these tags that read, ‘I am Filipino’ or ‘I am Chinese.’

What was your happiest memory of the Central Area?

At Maryknoll Kindergarten, I fell in love with a girl named Pauline. In first grade I’d go around with my Dad to the gambling halls down in the ID. Since my Dad had been a boxer, he was a hero not only to the Asian community but also in the Seattle sports scene. After he retired from boxing, he’d go to all his favorite places: the restaurants, the barbershops, the gambling halls, the haberdashery shops, and he’d bring me along. At the gambling halls, if these guys were winning I’d get a nickel, a dime or a quarter. We’d go from spot to spot. If my Dad forgot a place, I’d tell him we had to go there. I got all this change together.

In the first grade, Pauline was sitting up by the teacher. We had wooden desks with two people facing each other so I paid my way up to sit next to Pauline. I remember I had to pay a couple of folks off to sit next to Pauline. That was the happiest day of my life. Of course, one day we went to school and Pauline and all the other Japanese kids had been hauled off to concentration camps. And only the Filipino kids were left. That was the saddest day of my life.