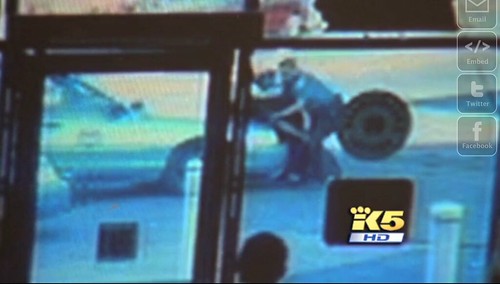 As we reported last month, police are investigating the use of force by one of their officers after an October 6 arrest of a man at 23rd and Union. Now, new video of the incident has come out, shining a little more light on the incident.

Leo Etherly was stopped shortly after 4 p.m. as police investigated a hit-and-run at 29th and Jefferson. Police say Etherly and his vehicle matched the suspect descriptions from the scene, so they stopped him in the parking lot of the Midtown Centre near the Liquor Store.

Police and witnesses CDNews spoke with described Etherly as uncooperative as police attempted to detain him, so officers used force. One officer allegedly used more force than the others. Witnesses and Etherly said the officer choked him, and Etherly ended up with a bloody and bruised eye.

Police say Etherly spit at officers before the force was used. Spitting on an officer is considered assault. Etherly’s attorney claims the spit was involuntary due to his client being choked.

Etherly was transported from the scene to the hospital before being booked on suspicion of hit-and-run and assaulting an officer. The hit-and-run charges have been dropped, but King 5 reports the assault charge is still pending.

Below is the King 5 report with the new footage. It is still a bit difficult to make out exactly what happened, but the video does seem to corroborate many of the witness accounts CDNews gathered. Etherly’s attorney James Egan says the not-yet-released police cruiser dashboard camera footage is more clear.