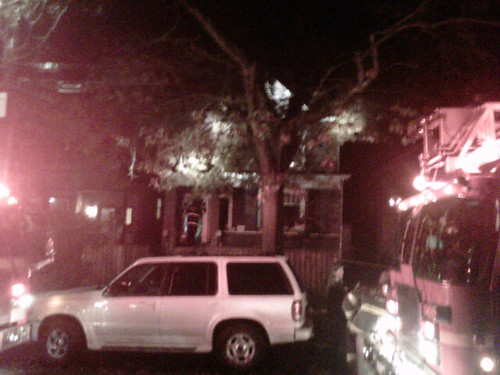 The Murrays are still looking for a permanent place in the neighborhood to call home after a devastating Halloween night fire consumed their second-floor flat at 26th and Jackson. The fire consumed nearly all their belongings, and the family could use a little community help to get their lives back in order.

There will be a fundraiser today (Tuesday) from 4–8 p.m. at the Chieftain Irish Pub at 12th and Marion.

As we reported previously, the biggest hurdle is finding a new spot to live. The girls (8, 10) go to Leschi Elementary, and the boys (11, 13) go to Washington Middle School, so finding a spot in the neighborhood is important. Swing by the Chieftain this evening and help out.

Mark Murrary (Lead Carpenter at Seattle U and all around amazing guy), lost his home on Halloween to a fire. His family and he are currently trying to find a new place to live. They lost everything – and we are trying to raise money so they can nest in a new home. Please come – give what you can – have fun! More updates on specials and raffles will be coming soon!

A family of six who lost their possessions in a Central Area duplex fire on Halloween Night received a $500 gift card this morning from Seattle’s Bravest Charity, a nonprofit organized by Seattle firefighters.

David Churchill, director of Seattle’s Bravest Charity, said the donation was made to help the family through the holiday season.