It may have taken 40 years, the clean-up of massively contaminated soil, a City Council-approved re-zone and federal funding to help make it happen, but Capitol Hill Housing’s latest project to bring affordable housing to Seattle is ready to celebrate its grand opening with a ceremony and tours Friday afternoon:

A polluted lot in central Seattle, vacant for forty years, has been transformed into “The Jefferson” – a vibrant new affordable housing and retail construction project. On October 19, Capitol Hill Housing (CHH) will hold a grand opening for this beautiful building with 40 units of affordable housing and 4,500 square feet of commercial space designed for local businesses.

The celebration will feature a tour of the project and remarks from Seattle Mayor Mike McGinn, CHH CEO Christopher Persons, and other officials from the State of Washington and King County. 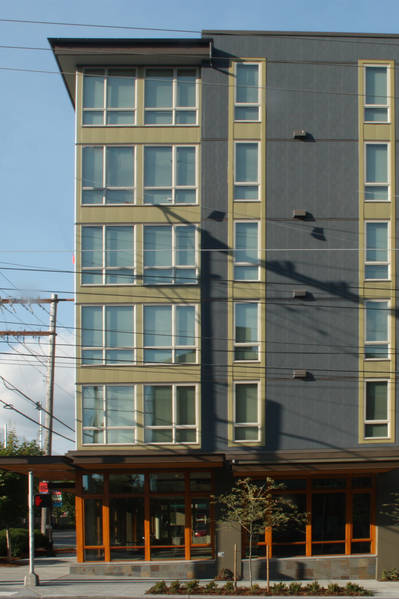 Designed by 15th Ave E’s Environmental Works, The Jefferson stands six stories and incorporates a roster of green features including “heat recovery ventilation units, high performing windows, a low energy elevator and an ultra-high efficiency gas system.” Its 40 one and two-bedroom apartments are designated affordable — “for workers earning up to $36,000 for a single person or $41,000 for a two-person family (60% of the median income)” as CHH puts it. And while the first tenant of the 5,000 square feet of ground-floor commercial space — a physical therapy facility — hasn’t exactly wowed neighbors looking forward to the new businesses in the area, the fact that The Jefferson exists at all is worth celebrating.

The city had taken possession of the contaminated lot and was looking for a plan to put it to use. After a decade of inaction, in 2008, the land was given to Capitol Hill Housing. In 2009, soil testing indicated that gasoline and benzene levels from a gas station that operated at the location starting in 1926 were hundreds of times above the state’s cleanup standards. But with a financial boost from King County, the site began cleanup efforts in fall of 2010.

Perhaps more remarkable than cleaning up a site with massively high benzene levels, the roster of parties involved in financing the project is testament to the challenge of creating an affordable housing project of this scale:

It all adds up to a fully-leased building and a new group of neighbors already moved-in and enjoying life at 12 and Jefferson.

10 thoughts on “On a lot vacant for 40 years, ‘The Jefferson’ celebrates opening Friday on 12th Ave”