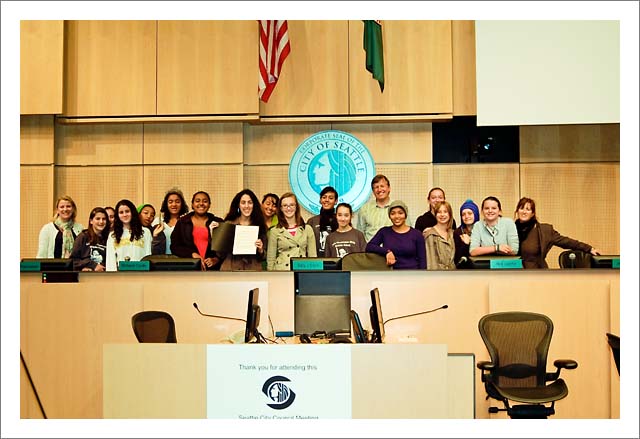 The day aims to highlight the challenges girls face around the world to gain access to education and other basic rights, and empower them to advocate on their own behalf.

Lake Washington Girls Middle School empowers its students to become young women strong in mind, body, and voice, and our students are passionate about supporting the United Nations General Assembly Resolution on the International Day of the Girl Child and the mission of Girls Schools Unite “to galvanize worldwide enthusiasm for goals to better girls’ lives, providing an opportunity for them to show leadership and reach their full potential.”

Lake Washington Girls Middle School student body president Rachel Kaftan ’13 and Head of School Patricia Hearn spearheaded the effort, along with the Seattle Girls’ School chapter of Richard’s Rwanda-IMPUHWE, and other organizations, to have Seattle join with other communities to commemorate the United Nations General Assembly Resolution 66/170, which designates October 11th as the International Day of the Girl Child. 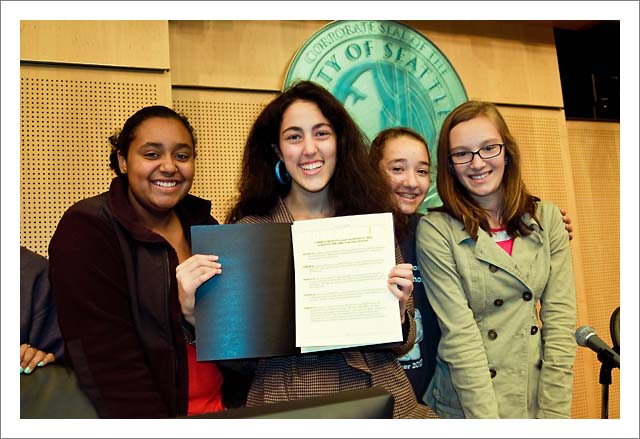 Yesterday the entire Lake Washington Girl Middle School Class of 2013 went to Seattle City Hall to meet with Councilmember Mike O’Brien to accept the official proclamation. Councilmember O’Brien spent thirty minutes speaking to our students about their experiences in middle school, as young women, and as residents of Seattle and Washington State. The group spoke of ways to use their strong voices to make change, and discussed the fact that the past eight years have been the only time in the country’s history when a state’s governor and two senators have all been women. O’Brien offered, “this is the norm in Washington and we expect you all to be leaders.”

Students at Lake Washington Girls Middle School will spend the Day of the Girl working on sister-group video projects focusing on what it means for girls to empower one another to be strong in mind, body, and voice which will be shared on our website in the coming weeks.