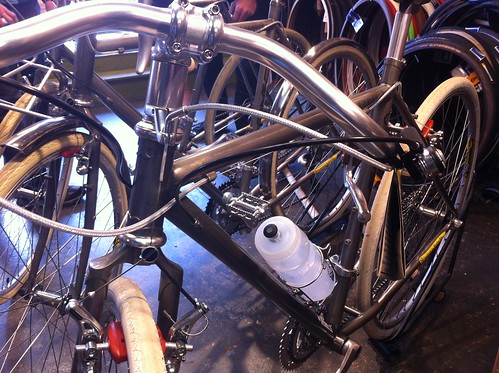 Cycling Illustrated recently interviewed Alex Kostennik, owner of 20/20 Cycle on Union Street. 20/20 (named such because it’s address is 2020 E Union) is a welcoming, laid back shop, and the people who work there are really just interested in getting your ride rolling again. They will almost never try to upsell you or push expensive new components. I’ve gone in thinking I needed a new part and determined to buy one, only to leave happily with a small tweak or quick fix to the existing part done at no extra charge.

I’ve sometimes scratched my head, wondering how they make money if they keep fixing my problems for next to nothing. But then again, I’m now loyal to them and make sure to go there first for any little project or routine purchases, so I guess it worked!

In the interview, Kostelnik described his bike shop philosophy:

We cater to moms with duct-taped Burley trailers with their kids inside on their way to Montessori school. People who ride in the rain, in the snow, it’s those people. Then it radiates out from there. If you were going to make a tree, the trunk of the tree is them. We’re super practical commuter people, me included.

The rest of the interview goes from discussing his days as a mechanic in other shops, the early days of 20/20, his thoughts on US foreign policy in the 1960s, life without a car, why he set up shop in the Central District, and more.

The interview also touches on 20/20’s new hand-built bikes: The Sealth. Originally dubbed the Kalakala, named after the 1930s Puget Sound ferry, the bike had to change names when the Kalakala’s owner threatened legal action. The frames, designed by Kostelnik, are made by Bombus Bikes, based in the InScape Arts building in the International District.