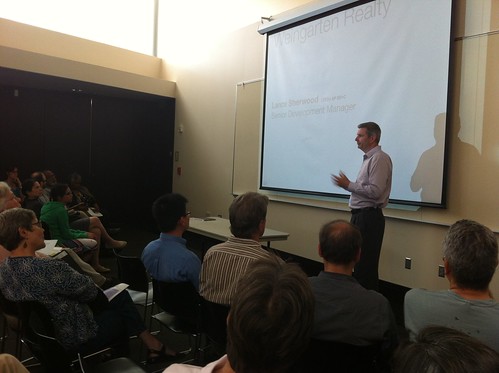 A protest against Wal-Mart is planned at 23rd and Jackson Wednesday. People will be handing out leaflets about the negative affects a Wal-Mart “could have on local and sustainable food systems,” according to the press release. The action is part of national Food Day.

The effort is led by Making Change at Wal-Mart, an affiliated group of the UFCW21 labor union, which represents grocery and retail workers among others. The union represents the workers at Red Apple and has been mobilizing ever since rumors of Wal-Mart started during the summer.

The owners of the Promenade 23 shopping center, the Houston-based Weingarten Realty, has never mentioned Wal-Mart as a planned tenant. They wrote CDNews again Wednesday morning to reiterate that they have no plans for a Wal-Mart at 23rd and Jackson:

Over the past several months, speculations have been made regarding plans for Promenade 23, located at 23rd Avenue S at S Jackson Street.  We are  evaluating all options and have not made any firm plans for Promenade 23.  Weingarten takes time to evaluate all options to do what is best for the community, tenants and its shareholders.  Once firm plans are made, we will make an announcement.  We do not have current or future plans to develop a Wal-mart at this location.

To mark Food Day (October 24th)—a nationwide celebration and movement toward more healthy, affordable and sustainable food– concerned residents will leaflet at Promenade 23, the shopping center at 23rd and Jackson in Seattle’s Central District. The action aims to raise awareness about a possible new Wal-Mart store being proposed for that location and the impacts it could have on local and sustainable food systems. Leafletters will carry out their action from 10am until 1pm.

The organizers of the action are members of the Community Alliance for Global Justice (CAGJ), a Seattle-based non-profit dedicated to strengthening local economies. CAGJ recently joined the Puget Sound Making Change at Wal-Mart Coalition because of their concern for how it will impact the food system.

“Wal-Mart drives consolidation in all industries, and the food system is no exception.” Says CAGJ Executive Director, Heather Day. “It is imperative that we find solutions to ensure everyone have access to healthy food. Wal-Mart is not the solution. Wal-Mart may claim they can solve food deserts in US inner cities, but we know better. Through its huge market power and drive for profits, Wal-Mart squeezes suppliers, negatively effecting every link in the food chain–farmers get unfair prices, farmworkers and Wal-Mart associates get unfair pay, and eaters get lower quality food.”

Concern about Wal-Mart’s entry into the Central District is sprung from Walmart’s new neighborhood market-style stores which many believe aggressively work to gain access to urban markets and undermine local businesses. “We know that Wal-Mart has targeted Seattle for its urban expansion, despite the fact that there are many grocery retailers already operating in this area, many of whom have higher wage and benefit standards than Wal-Mart.  Promenade 23 is one site that we are particularly concerned about, since it already has a union-represented, locally owned Red Apple store,” explained Elena Perez, coordinator of the Making Change at Walmart, Puget Sound coalition.

42 thoughts on “As anti-Wal-Mart protest gears up Wednesday, developer says no such plans exist”