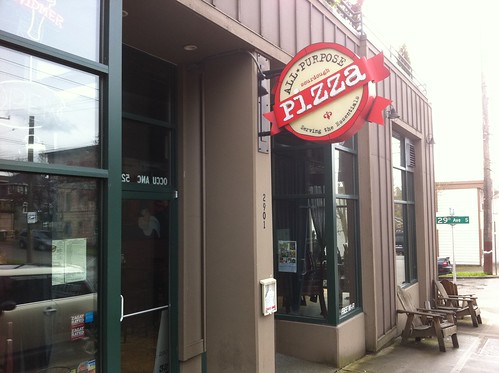 All-Purpose Pizza is closing for good Monday after seven years at 29th and Jackson. Owner Kedra Olsen said the restaurant’s operational costs do not seem likely to pencil out soon, as she had hoped.

Since the recession hit in 2008, sales have been down and have been slow to recover, she said. The shop needed more than $32,000 in sales each month to operate, and the business has been gathering debt waiting for things to improve.

“I wanted to stay open for the community and because I love what I do (and because I am an optimist),” Olsen told CDNews, “but it just can’t be realized, and it’s time for me to admit that the rebound I have needed since 2008 may never come.”

UPDATE 10/14: Olsen says they had such a busy day Saturday that they are taking Sunday off. There will be a final goodbye party Monday:

We thought we could make it through service tonight but were so busy last night we will be closed (Sunday). We have a LOT of beer to drink so we will be having an open house of sorts and a final goodbye on Monday 10/15 from 4pm-9pm. 2$ beers. We also have enough food for the party (5$ suggested donation). Swing by for a casual last gathering! Hope to see you tomorrow! Kedra

Dear Friends/Family of APP,
Shocking as it will seem, I have decided to close APP after service (9pm) Monday October 15th. After 7 years of business I have decided it is time to move on and unburden myself and the debt that has been amassing since 2008 and the economic crash. I have done everything I can over these past years to stay in business, waiting for brighter days, but the new economic reality doesn’t mesh with my overhead/bottom line which is, unfortunately, not negotiable.

The deficit has been incredibly daunting and it is time for me to admit defeat. I know it will leave a huge hole in the community, a place I have called home for so many years. It is extremely painful for me to make this decision and what makes it harder all of you: the people who started off as patrons, became friends, and are now family. Your love and support has meant the world to me over these years and it is because of that that I have made it this far. For that I can’t thank you enough.

I will be around tonight (Friday) and throughout the weekend. I hope that you can make it in so I can say goodbye and sling one last pizza hurrah!

Much love,
Kedra and the APP staff