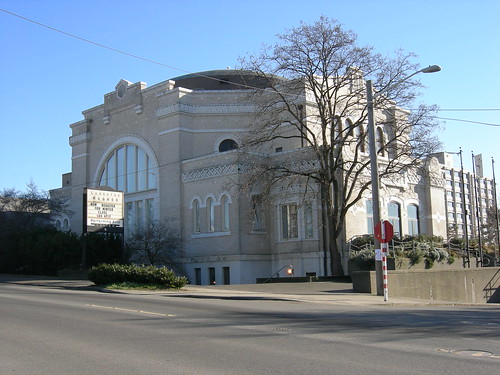 In a plan developed by the mayor and LHPAC leadership, the center could switch from being a Seattle Parks Department entity to the Office of Arts and Cultural Affairs (“OACA”). The move should not impact programming or funding levels, according to a press release from the Mayor’s Office. Rather it is supposed to help the center “become more closely connected with the broader arts community.”

OACA is also supposed to help the center find a financially sustainable operating model, which would be a huge shift for an organization that currently operates on a $740,000 budget, but brings in only $71,000 annually.

Councilmembers Nick Licata and Sally Bagshaw have already questioned the move, calling for a community meeting to discuss the neighborhood’s arts education needs and to dive into what sorts of changes would be required for LHPAC to generate more of its operating costs.

From the Mayor’s Office:

Mayor Mike McGinn announced today that his proposed 2013 budget will include a plan to support the Langston Hughes Performing Arts Center (LHPAC) into the future by transferring the cultural facility into the Office of Arts & Cultural Affairs (OACA) from the Department of Parks and Recreation. The addition of Langston Hughes Performing Arts Center as another program under OACA aligns with OACA’s mission and fits the purview of the Admission Tax to fund arts-related programs and keep artists living, working and growing in Seattle. The plan resulted from conversations with LHPAC staff, arts commissioners, and other arts leaders.

“Langston Hughes is a valuable arts and community resource for the Seattle community,” said  McGinn. “I thank city staff, the Arts Commission and community stakeholders for their work to help the city better support Langston Hughes in the future. I especially thank Executive Director Royal Alley-Barnes for her leadership in making this new approach possible.”

“This is an amazing opportunity for underrepresented and marginalized grassroots communities to become highly visible in the city’s public performing arts scene,” said Langston Hughes Performing Arts Center Executive Director Royal Alley-Barnes. “Mayor McGinn has touched many hearts with this proposal, and has generated civic excitement by making LHPAC an operating unit in the Office of Arts and Cultural Affairs.”

Langston Hughes Performing Arts Center has a staff of 7 FTE and an annual budget of just under $740,000. It operates as a cultural performing arts center with major programs including the Langston Hughes African American Film Festival and a summer teen musical. The goal of the center is to provide quality cultural entertainment and educational components that meet the needs of the community.

The response from Councilmembers Licata and Bagshaw:

In response to this proposed transfer, Councilmember Nick Licata, Chair of the Housing, Human Services, Health and Culture Committee, offered the following statement, “While I support empowering the LHPAC to reach its potential for serving Seattle’s increasingly diverse arts audiences, I need to know how nearby residents, civic leaders, arts professionals and Seattle Arts Commissioners view such a transfer.”

Councilmember Bagshaw, Chair of the Parks and Neighborhoods Committee added, “Langston Hughes Performing Arts Center has been a fixture in the Central District and a gathering place for community and the arts for decades. While this transfer is intriguing and might look good on paper, I want to make sure that it feels good to the people who use it”.

Licata and Bagshaw plan on meeting soon with interested community representatives to explore the Mayor’s proposal for LHPAC. Questions heard from the community include whether there are clear goals and expectations for LHPAC’s future: Is it possible for LHPAC to evolve into a stand-alone non-profit or even for-profit venue? If so, should a steering committee of arts professionals and Central Area community members be assembled to guide the process? What are reasonable expectations for how long such a transition will take? How will staffing need to change?

In addition to Central Area community members, the Councilmembers plan to invite OACA and DPR management as well as the Seattle Arts Commission chair and its members to participate in the meeting.