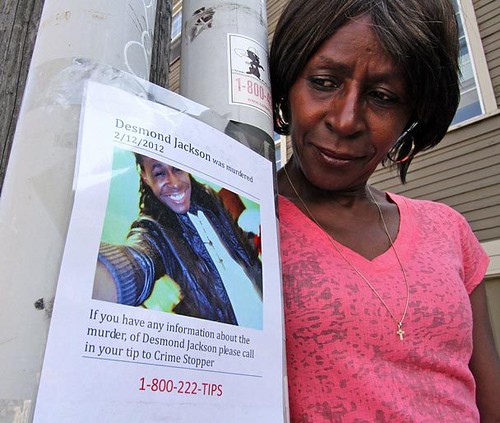 Less than a day after Seattle Police announced an arrest in the investigation into the 2008 killing of Quincy Coleman, the department launched a media campaign encouraging people to come forward with information about other unsolved murders.

Among those most prominently featured is the CD’s Desmond Jackson, who was shot earlier this year outside a Sodo nightclub. Jackson’s Aunt Gazelle Williams, one of the campaign planners, told the Seattle Times it pains her to know Jackson’s killer is still loose:

“We feel really ripped off,” said Williams, who was one of three community members on an SPD committee that planned the launch of the “Who Killed Me?” campaign.

“It’s driving me crazy, the thought this person who killed Des is still walking around, going to parties and doing whatever he wants,” she said.

SPD Detective Rolf Norton told the Times that police often know who was involved, but don’t have enough evidence or cooperation from witnesses to pursue charges. This happened after the CD shooting of Tyree Lee, and it took officers years to gather enough evidence to arrest the shooter:

As an example, he pointed to the April 2007 gang shooting of Tyree Lee in the Central Area.

Within the first week, detectives knew the names of those involved, but it took three years before they had enough evidence to arrest Jymaika Hutson, who pleaded guilty in March 2011 to second-degree murder and is now serving a 15-year prison term.

“The people who were lying to us eventually started telling the truth,” Norton said of that case.

Monday’s arrest of a suspect in the Coleman shooting came after the suspect’s friends went to police after he allegedly bragged about it. He has not yet been charged, but SPD identified him in a lengthy release as D’Angelo Saloy (UPDATE: He was charged Tuesday with First Degree Murder).