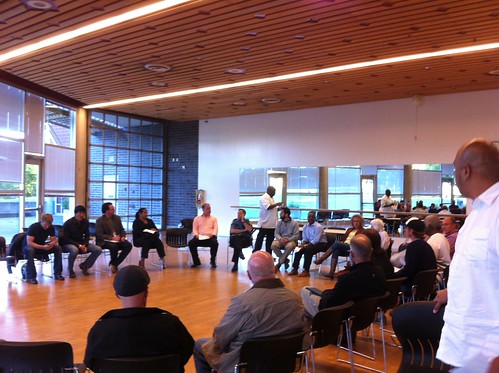 The crowd at Tuesday’s follow-up discussion about violence in the neighborhood was much smaller than the packed house that showed up in the wake of the killing of Justin Ferrari and the Cafe Racer shootings in May. If the May meeting was a much-needed chance for people to voice frustrations, fears and hope, Tuesday’s meeting was an attempt to keep the conversation going, even if it had no clear plan for action.

Garfield Community Center Director Mazvita Maraire announced that the center will host an ongoing series of discussions about violence every few months. The talks are a way to get more neighbors to meet each other, hear each other’s stories, fear and hopes, and learn about ways to get involved.

The meeting was a little bit disjointed as people talked about their projects and their thoughts on causes and solutions to violence. Below are some of my notes (if you were there, please add anything I missed to the comments):

Pastor Greg Banks from First AME and one of the founders of Standing in the Gap Seattle was the moderator for the discussion. He said Standing in the Gap decided to hold their CD-South Side march last weekend because they wanted to get ahead of the violence instead of simply doing prayer vigils after shootings.

“We decided we were being very reactive, and we decided to be proactive,” said Banks.

Robert Stephens talked about his work to get the Garfield-area “Superblock” active in encouraging positive safety changes around the Medgar Evars pool, which could include things like tree trimming, better lighting and chances for art projects.

For the sake of conversations about violence, he said residents need to move past throwing blame around to other groups.

East Precinct Captain Ron Wilson said that shots fired incidents are down throughout the precinct compared to recent years. He said part of the perception of increased shootings could be because “instantaneous news makes it seem like there’s more.”

Much of the conversation centered around youth programs, and several employees of the city’s Youth Violence Prevention Initiative attended. They urged solutions that addressed issues in school instead of sending kids to “Gang University,” A.K.A. the Juvenile Detention Center.

But they also urged the group not to “criminalize youth,” especially for young black men. Much of the recent violence was by people older than the ages targeted by current programming, and there are few resources for people returning to the neighborhood after getting out of prison.

Several mothers talked about not knowing how to prepare their sons for dealing not just with violence, but also the prospect of racial profiling from the police. Foxy from Cortona Cafe asked Captain Wilson if he thinks there is a racial profiling problem in SPD.

“The Department of Justice said there was a concern that it is occurring,” said Wilson. “We don’t tolerate it.” However, he admitted that people often feel racial profiling is occurring.

“SPD needs to remove the perception that stops are racially charged,” he said. “We need to get better at talking to [detained] people and let them know why we’re doing what we’re doing at the very first safe opportunity.” If something does happen, he urged people to file a complaint with the Office of Professional Accountability.

Several residents expressed concerns about the long-standing perception that there are “two Garfield High Schools,” with well-to-do kids in the advanced classes on the top floor and the rest on the bottom floors.

At the heart of the challenge the neighborhood has as it tried to make changes to improve safety is the fear that those changes will leave out some residents or make some people feel unwelcome. At the May meeting, one man said he grew up in the neighborhood, but “I don’t know anybody on my streets anymore,” he said. “That breeds tension.”

This point moved conversation to the need for more people to get out and get to know their neighbors and be active in places like the Garfield Community Center and the Garfield Teen Life Center.

This seems like a perfect way to open conversation here on CDNews: What ideas do you have for giving people a better chance to get to know their neighbors? I’ve got one: The city should expand the streamlined block party process they use for National Night Out to encourage multiple block parties throughout the year rather than just one.

10 thoughts on “At meeting, Garfield Community Center announces series of conversations about violence”