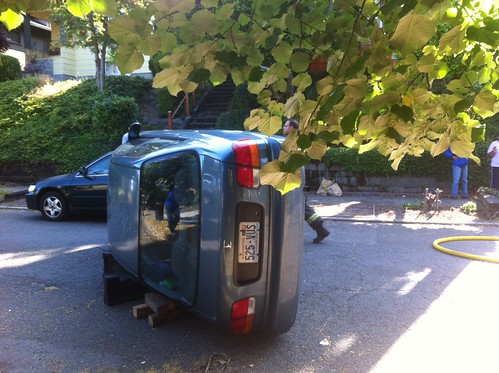 A car flipped on 30th Ave just south of Columbia Street Friday morning. Two people were in the vehicle and were not seriously injured, though they were visibly shaken. We will have more details soon.

UPDATE: Witness (and CDNews reader) Elizabeth Atwood said she was getting into her car on 30th Ave just north of Cherry when the car turned from Cherry and went quickly up 30th. It was going so fast, she said, that when it rear-ended a parked car on the east side of the street, the rear of their car raised into the air and almost flipped completely over the top before falling on its side.

Atwood called 911 and called for help from neighbors to see if the car occupants were ok. They were screaming and yelling, and SFD arrived to assist them from the car. Neither young woman in the car seemed to have serious injuries and were sitting up and talking to responders.

“People come so fast on this street all the time,” said Atwood, who was also shaken from responding to the crash. “They could have hit me.”

11 thoughts on “Car flips on 30th Ave near Columbia, no injuries”