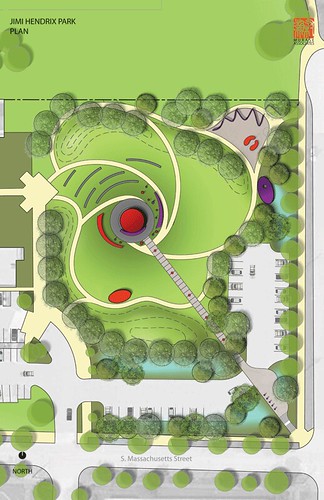 You can now support Jimi Hendrix Park, planned for 24th and S Massachusetts, as the park’s foundation launches a campaign to raise $250,000 in 70 days.

The Indiegogo campaign aims to fund the Sound Wave Wall feature of the park, “a curved colored steel wall with cut outs of notable figures of Jimi Hendrix performing. As the sun passes over the wall, people can walk past his long shadows.”

More details from the Indiegogo description:

The design process funded by the Department of Neighborhoods Large Project Matching Fund produced a preferred plan and design narrative in 2011 that was approved by the Seattle Parks and Recreation Department.  The design is bold, colorful and electrifying as the park’s namesake and transforms an empty grassy space into a multi-use location which includes:

• Central shelter and other picnic stations

What We Need & What You Get

Following a year-long public design process, the Jimi Hendrix Park Foundation, announced the launch of a capital fund-raising campaign to finance construction of the park that will celebrate the life, music and legend of Seattle’s hometown icon, James Marshall Hendrix.  The non-profit foundation, with the assistance of the Friends of Jimi Hendrix Park, aims to raise $1.5 million in private funding to supplement a $500,000 Seattle Parks and Recreation’s Parks & Green Spaces Levy Opportunity Fund.

Now, we need your help to fund the iconic Sound Wave Wall in Jimi’s image. Celebrating sound waves, the Sound Wave Wall is a curved colored steel wall with cut outs of notable figures of Jimi Hendrix performing. As the sun passes over the wall, people can walk past his long shadows.

The height of the wall will vary from 4’to 10’ high, and openings will be sited to allow for great views along the path, which connects Jimi Hendrix Park to Sam Smith Park, our gateway. The wall will be oriented for maximium visibility from the street. In addition to the large cut-outs, there will be perforations in the steel to allow for screened images and patterns to form when looked at from varying distances.