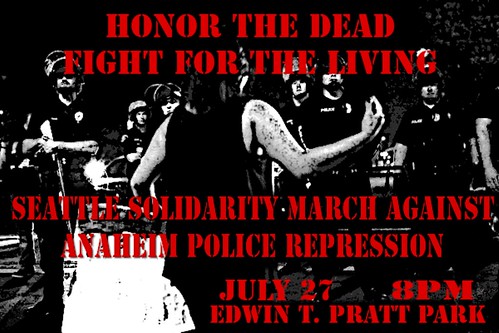 Demonstrators are planning a protest Friday evening at Pratt Park to express support for ongoing protests in Anaheim against two recent police shootings there.

The protest at Pratt gets under way at 8 p.m.

The action comes two weeks after a protest against a recent Seattle Police raid of an apartment at 29th and Judkins marched from downtown to Douglass-Truth Library.

More details from the event page:

On July 21st, an unarmed, 24-yr old Latino named Manuel Angel Diaz was shot several times by officers of the Anaheim Police department. He was left unattended to die where he was shot. The community stood up, and were brutally repressed by police who released an attack dog on a mother and her baby and shot indiscriminately at the crowd of neighbors, including women and children.

Anaheim was enraged already, but then the APD struck again killing Joel Acevedo another Latino during an apparent “gun fight” on the night of Sunday the 22nd. Witnesses nearby only heard the fire of the guns by the cops, though the police said they found a gun sitting next to the body of Joel. He was stopped for accused car theft.

Both of these men were “documented gang members”, something used as an excuse by APD for their actions. We will not take excuses for violence on our communities, especially those of color, anywhere. Not in Anaheim, not in Dallas, not in Oakland, not here in Seattle and surrounding area.

In other SPD news today, the city has reached a tentative agreement with the federal DOJ on police department reforms, the Seattle Times reports.