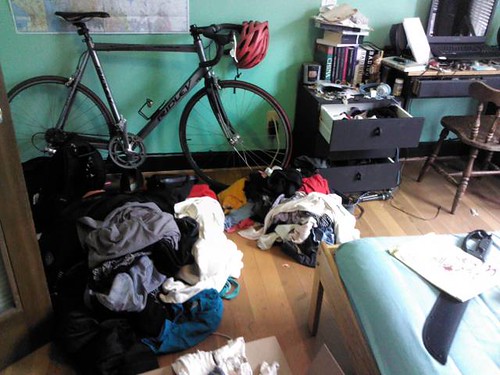 Did anybody else hear it?  Lots of police in the area afterwards.

EDITOR’S UPDATE: The SWAT team raided an apartment near 29th and Judkins early this morning, executing a search warrant. Nobody was arrested in the search, but people were detained and flash grenades were used.

The apartment has been a key organizing space for the upcoming Everything for Everyone festival, and some occupants are active in Occupy Seattle and the Red Spark Collective, a communist group.

Police were apparently searching for evidence connected to the May Day actions that caused property damage and some allegations of assault against police officers.

Details on the raid, from a post on the Kasama Project website (Red Spark is a Kasama member):

Early morning, July 10, SWAT police forced their way into the Seattle apartment of organizers from the Occupy movement. The sleeping residents scrambled to put on clothes as they were confronted automatic weapons.

The neighbor Natalio Perez heard the attack from downstairs: “Suddenly we heard the bang of their grenade, and the crashing as police entered the apartment. The crashing and stomping continued for a long time as they tore the place apart.”

After the raid, the residents pored over the papers handed them by a detective. One explained: “This warrant says that they were specifically looking for ‘anarchist materials’ — which lays out the political police state nature of this right there. In addition they were looking for specific pieces of clothing supposedly connected with a May First incident.

UPDATE X2: Some people are holding a rally at Westlake Park tonight (Tuesday) at 7 p.m. to protest the raid.

Some of the apartment’s residents are also involved with the Food for Everyone BBQs every Sunday at 2 p.m. near the old Horace Mann school.

Early this morning,  SWAT and detectives served a search warrant to a residence  as part of the ongoing May Day investigation.  Just before 6:00 am,  detectives contacted four individuals inside the residence in the 1100 Block of 29th Avenue South.  The search resulted in evidence that will be useful in the investigation.  The detectives are continuing to work toward identifying suspects in the May Day riot.  There may be more search warrants in the future.  The four individuals contacted inside the residence this morning were cooperative with  investigators and after being interviewed, were released from the scene.  The May Day investigation continues.  Anyone with information is asked to contact SPD’s May Day tip line at (206) 233-2666 or [email protected]

Here’s the press release on the incident from Occupy Seattle:

Early morning, June 10, SWAT police forced their way into the Seattle apartment of several organizers from the Occupy movement. The sleeping individuals, two residents and two visitors, scrambled to put on clothes as they were confronted by officers holding drawn tactical rifles.

The neighbor, Natalio Perez heard the attack from downstairs: “Suddenly we heard a loud crash which was, I guess, them breaking down the door, and then right after I heard what must have been the flash bang grenade and a lot of yelling over a loudspeaker. I heard them go up the stairs and then there was just a lot of crashing and stomping as they tore the place apart.”

After the raid, the residents examined the papers handed them by a detective. One explained: “This warrant notes that they were specifically looking for ‘anarchist materials’—this says to me that it’s an explicitly political thing. That we are not being raided for connection to any crime, but to some political ideology that the police think we have. I was just doing research on the old Pinkerton strikebreaking paramilitaries, so it’s kind of funny, you know, to have that old red scare history burst through my front door at six AM.”

This action targets well known activists from Occupy Seattle who have recently been involved with anti-police brutality organizing, actions against the juvenile detention center and the weekly Food for Everyone free barbecue in the Central District.

“They took basic stuff,” another resident said. “A zip-up sweater, one glove, a blue beanie, a pink scarf. They took a few flyers we had, one from a book release party for a book on Occupy.

This is stuff that would be in the house of any activist or even people who just come to events now and then.”

100 thoughts on “29th & Judkins: Loud bang and shouting at 5am – UPDATE: SWAT raid on communist collective”