UPDATE: I was going to cover the meeting, but the place was on police lockdown when I showed up maybe 2-3 minutes late. The officer guarding the door told us the meeting had reached capacity, and that nobody else could go in. There were only a few of us locked out, including longtime Yesler Terrace community organizer Kristen O’Donnell and a small group of young people who came to the meeting to voice their concern about police action during a queer “dance party” during Pride. 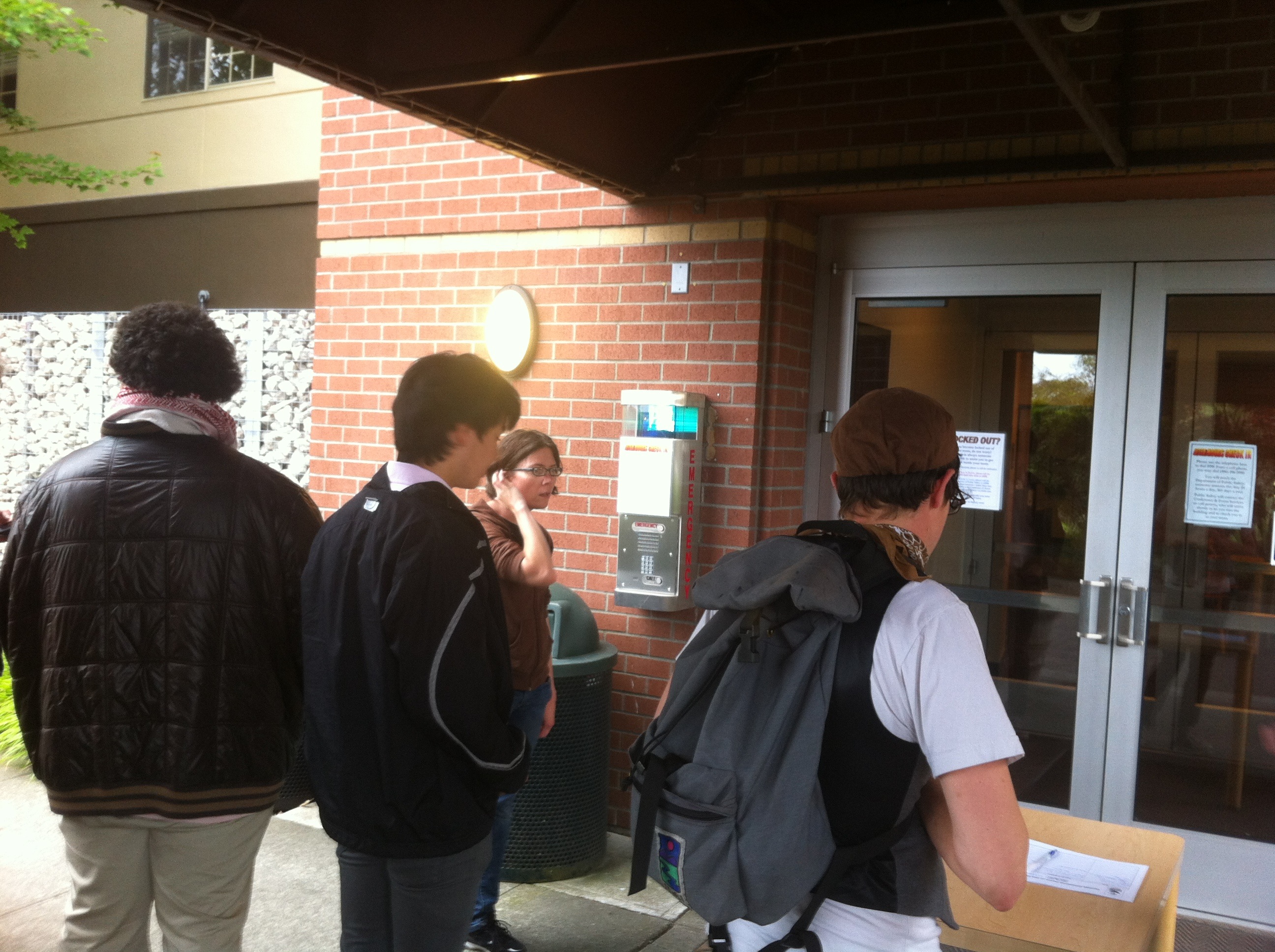 Some of the people who were turned away at the door

I’m not sure what the organizers were thinking (they claimed the room was at capacity, but when we were finally let in, there were plenty of empty chairs). The young group who showed up to participate in a community meeting to talk to a panel of police and government leaders were turned away at the door (several left before we finally talked our way inside). Some murmured that the only reason they weren’t let in is “because we look like this.” And no matter what the intent of the police and EastPAC organizers, you can understand how they might get the feeling that they are not welcome to voice their concerns in these meetings.

It took about a half hour before we talked our way in, and the meeting had already moved to Q&A. If you were at the meeting, please let us know what happened at the beginning in the comments below.

New East Precinct Commander Ron Wilson would not comment on the use of force in busting the queer dance party, which is under investigation. When asked about his comment to our sister site Capitol Hill Seattle that he did not “believe the actions we took were out of line,” Wilson said he was referring to the decision to move the crowd out of the street, not necessarily the decision to use pepper spray.

He said he is supportive of free speech rights, pointing out that a student debt protest recently occurred without incident.

“We had a march last night that went off, I think everyone would agree, extremely well,” he said. But he acknowledged that “we need to improve.”

Senator Adam Kline said that, compared to his youthful experiences protesting for Civil Rights in Baltimore, “The tidal change in the professionalism [in SPD] is impressive.”

During the rest of the conversation, two themes came up several times: Youth and social programs need more funding, and people need to feel they are being listened to. We have a lot of work to do on both counts.

UPDATE: EastPAC Chair Stephanie Tschida has apologized that anyone was turned away. See her comment below.

We will also be welcoming our new East Precinct Commander, Captain Ron Wilson, who began his career with the Seattle Police Department on December 10, 1976. In his previous assignments as a Captain he commanded the Community Outreach Section and the Metropolitan Section which included SWAT, Harbor Patrol Unit, Mounted Patrol, Canine Unit and Crisis Intervention Team.

We’ll see everyone there, and please be on time, so we can start on time!

(enter on 11th and Jefferson, park free in front of building)

UPDATE: Here’s the video from Ciaren (thanks!). I apologize for the poor audio (I said I would fix it and then failed).