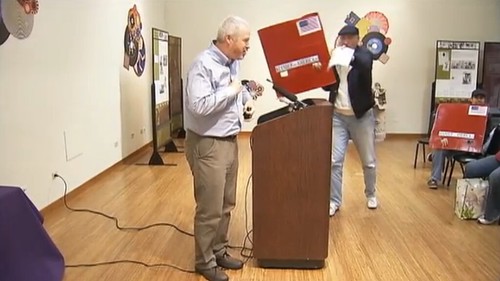 Mayor McGinn held a town hall meeting Tuesday evening, but it didn’t last long. He left in the middle of the meeting after residents, many angry about police violence, continued to interrupt him.

“I’m sorry guys, I’m done. No, this is not a productive meeting,” the mayor told attendees of the discussion at the Northwest African American Museum. KIRO TV has video of the meeting.

The mayor has held 60 town hall meetings since taking office, but this is the first time he has left one before it was over. He said he would reschedule.

Some residents interrupted a community forum on violence at the Garfield Community Center May 30, but moderators gave them time to have their say even if it was out of turn.

Were you at the Tuesday meeting? What is your take on what happened?