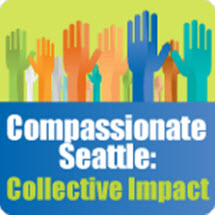 Compassionate Seattle is holding three minutes of silence at noon Sunday at the scenes of recent violence around the city, including MLK and Cherry. They invite people to join them in silent reflection, prayer or meditation on behalf of people impacted by violence.

They are also organizing two discussions at Seattle Center about recent violence, one Sunday and one June 24.

Compassionate Seattle invites all citizens to pause for three minutes of silent reflection, prayer, or meditation on Sunday, June 10 at 12:00 noon. At 11:45 AM, we invite each of us to step into the streets to ring bells as a “call to silence”. A call has been put out to all the Church/community bells to also start ringing at 11:45 AM.

No matter where we each may be on Sunday; whether at home, in our cars, at a park, or attending a church, mosque or synagogue – we are invited to observe this city-wide moment of silence on behalf of those impacted by violence of any kind, but especially those whose lives have been forever changed by the most recent, tragic shootings. A number of us will gather at the actual sites where the shootings took place in South Seattle, Pioneer Square, MLK/Cherry, Town Hall parking lot, Seattle Center and Café Racer.

Sunday, June 10 and June 24, from 4 to 7 pm: Community gatherings to generate compassionate action and build a living peace through collective impact

Compassionate Seattle invites the community to an open and honest dialogue about the violence at two facilitated community gatherings; Sunday, June 10, 4pm to 7 pm, and Sunday, June 24, 4pm to 7pm, at Seattle Center. In these gatherings, participants will be able to express how they have been impacted by violence in the community and share their vision for a just, compassionate, and safe Seattle. We will conclude by identifying compassionate actions we can take to generate positive peace and strengthen the health and vitality of our city.