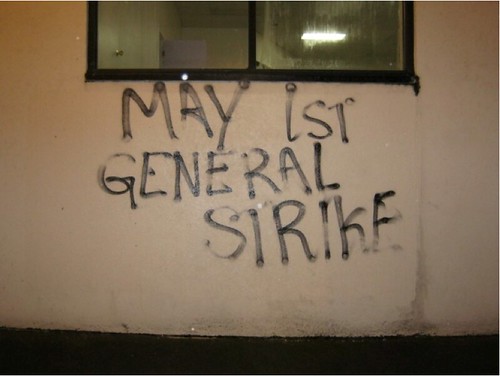 In the months leading up to the May Day protests (see our coverage of the March for Immigrants and Workers), there was a big increase in graffiti promoting a proposed day-long general strike. The announcements were painted all over the neighborhood — on public and private property.

In March, a 26-year-old was arrested for allegedly painting the announcement at 23rd and Jackson, and discussion of the graffiti has been a hot button issue on CDNews ever since similar announcements for Occupy Seattle’s December Port Shutdown led a CDNews reader to post a popular open letter about the issue.

Now, police say that the prolific graffiti was a “clear” warning that there was going to be trouble at some of the May Day protests. A handful of black-clad protesters smashed several windows downtown during the May 1 day of action. Later that night, someone also threw a brick through Mayor Mike McGinn’s home window.

The CD graffiti is under investigation, and detectives urge property owners to report any recent graffiti incidents.

In the months leading up to Tuesday’s May Day demonstrations, Seattle Police Department Graffiti Detective Chris Young saw a dramatic uptick in “anarchist graffiti” across the city.

“There’s was a lot of [anarchist taggingi] all of a sudden in March,” Det. Young says. “They were pretty indiscriminate. They would hit anything.”

Taggers spray painted circle-As and other messages—promoting May Day demonstrations—on street signs, businesses, “people’s garages, any place,” Det. Young says.  ”They made it very clear they were going to cause trouble” on May Day.

Det. Young says he is still investigating eight other pre-May Day incidents—primarily in the Central District—of anarchist tagging and graffiti. The department is now also working to identify a number of suspects who vandalized businesses and cars in downtown Seattle during this week’s May Day demonstrations.

If your business or property was recently vandalized or tagged, you can file a police report online  or by calling the department’s non-emergency reporting line at (206) 625-5011.