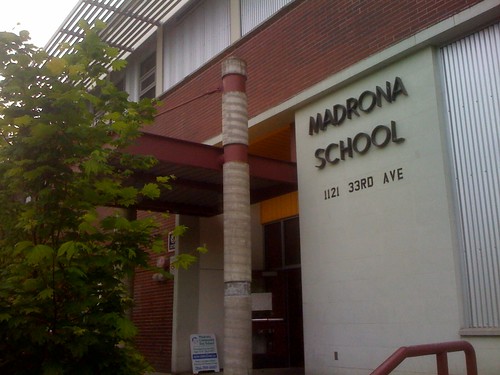 Much of the enrollment decline is due to parents sending their children to other private and public schools. Due to continually poor test results, students within the Madrona K-8 area can enroll in other SPS schools. But some of the troubles also stem from racial tension at the 15-percent-white school, KUOW reports.

Below is an excerpt of the radio story. You can listen to the full story on KUOW’s website.

The school principal suggests low test scores scare some parents away. She admits those need to improve. Also, the school fails to meet federal requirements for yearly progress. So, students assigned here can pick a different school if they want.

Besides all that, Karin Richard sees another possible reason for low enrollment. Something she calls “playground chatter.”

Richard: “I had a friend who said she’d moved to Madrona and within the first three weeks of being here at the playground she said she’d heard everything about the school.”

Her friend heard things like the school doesn’t have an arts program. There’s not much recess. That advanced kids don’t get enough attention.

Richard: “And none of it was true.”

Richard started her networking in the park to set the record straight.