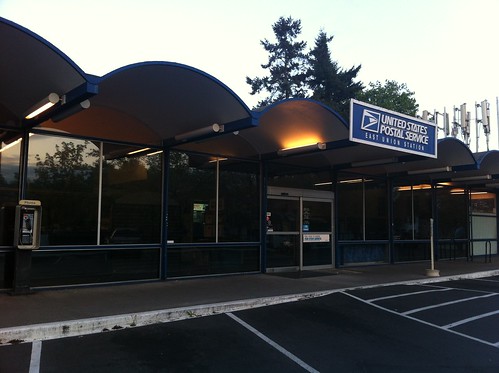 The US Postal Service is in serious financial trouble, and those woes could hit the CD as the future of the 23rd and Union post office hangs from a string. Without action for the US Congress, the carriers based out of the 23rd and Union office will likely be consolidated to a USPS facility at 4th and Lander.

“We’ve pretty much agree to wait and see what the House of Representatives does” before making the decision, said Seattle USPS spokesperson Ernie Swanson. The Senate has already passed a bill that would prevent consolidations like the one facing 23rd and Union, but the bill the House is currently considering is very different from the Senate version. It’s not clear what the legislative outcome will be.

If the consolidation does happen, USPS is interested in keeping a retail presence in the area. Though the letter carriers and the vehicle fleet would move, residents should still be able to do their mail needs either in the current space or a nearby spot, said Swanson.

The same goes for nearby post offices on Broadway on Capitol Hill and 6th Ave in the International District. USPS intends to keep retail presences at each of these locations, as well.

“If that hapens, we would make every effort to find a suitable alternate location or just keep the retail where they are if that looks like the better option,” said Swanson.

Our sister site CHS reported in March that USPS is working out a new lease to stay on Broadway. However, it’s not clear how things will change if the letter carriers currently based at the location are relocated.

USPS has significantly reduced its workforce in recent years, hiring very rarely and letting people retire or leave voluntarily. Swanson said they hope to avoid further layoffs if the consolidation occurs, but nothing is certain.

News of the potential loss of such a large employer comes as 23rd and Union has seen a burst of new economic activity. Med Mix opened in late April, and The Neighbor Lady opened earlier this week. It’s not clear what effect such a move would have on the corner.