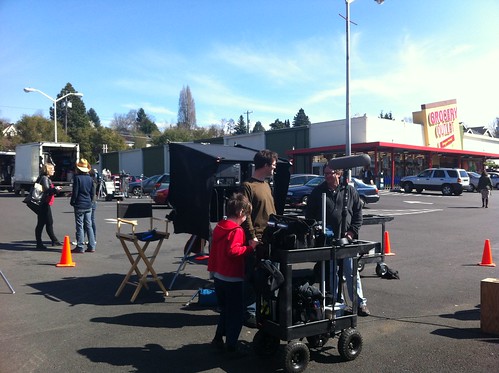 A film crew is stationed outside Grocery Outlet at MLK and Union for the first day of shooting “Touchy Feely.”

The film, starring Rosemarie DeWitt, Scoot McNairy, Ellen Page and Josh Pais, is directed by Lynn Shelton and will be shooting around the CD and Capitol Hill. Shelton previously directed several indie flicks, including the Stranger-inspired “Humpday” and a particularly crazy episode of Mad Men (the one in Season 4 where Don almost gets caught by the Feds, Lane’s father slaps him for having a black girlfriend and Lucky Strike drops Sterling Cooper Draper Price).

Anyway, today the crew is filming a shopping scene inside Grocery Outlet (who Shelton said “were super super nice” about shooting) and some shots at the bus stop in front of the Green Plate Special garden across the street. Next week, they will also be filming at 20/20 Cycle.