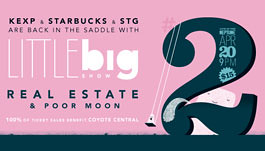 KEXP recently started a concert series to raise money for arts organizations in the region. Their second show — which is coming up April 20 at the Neptune in the U District — will benefit 23rd and Cherry’s Coyote Central. Tickets are $15 for general admission.

Four times a year, we will present bands at The Neptune, and donate 100% of ticket sales to a local non-profit.

Our second show will feature Real Estate and local group Poor Moon. Our beneficiary is Coyote Central, an organization that cultivates competence and creativity in adolescents through projects with professionals in the studio and out in the community.

April 20, 2012
KEXP, Starbucks & STG are back in the saddle for the return of Little Big Show at The Neptune, featuring Real Estate & Poor Moon. 100% of ticket sales benefiting Coyote Central