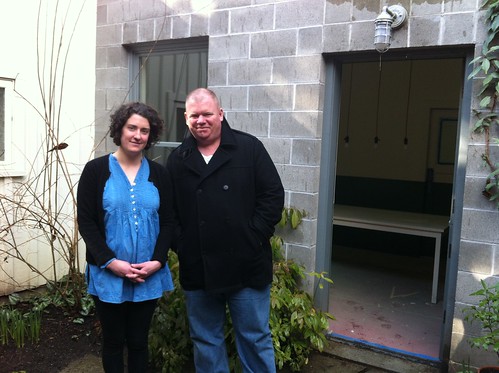 Madrona’s newest restaurant is almost ready to serve up a “hyperseasonal” menu on 34th Ave. Restaurant Bea will officially open March 30, though there will likely be a few soft openings before then.

Bea (pronounced “bee”) is looking to be “first and foremost, a neighborhood restaurant,” said Kate Perry, who owns Bea along with chef Tom Black. We talked in the under-construction restaurant. The floral wallpaper gives a cozy, home cooking feeling, which is what Pery and Black want.

“We want to be a fixture in the neighborhood,” said Perry.

Bea will serve dinner-only to start, but hope to add brunch a little down the road. Their menu will change often depending on what is in season.

“We’ll try to use what’s available, trying to utilize as much local food as possible,” said Black. That means using whatever fish the fishermen have that day and produce that’s ready for harvesting. Therefore, some menu items might stick around for a while, but others may be gone as quickly as they were added.

The restaurant takes over the space formerly occupied by June. But the inside is getting an extensive makeover, and the bar area will be significantly larger than it was previously. Happy Hour will go from 4-6, but they do not have plans to stay open late.

They are also renovating a private seating area in the back of the restaurant (see photo) that can fit parties of around 20, and they hope to open a patio space in the summer.

Both Perry and Black live within a few blocks of Bea, and they have been kicking around the idea of opening a spot in Madrona for a while.

“I’ve enjoyed a long career of opening up places for other people,” said Black. “We found a way to open a restaurant the way we want it to be and where we want it to be.”

They plan to open at 4 p.m. Tuesday, Wednesday and Thursday for happy hour. Dinner service starts at 5 p.m. Tuesday – Saturday.