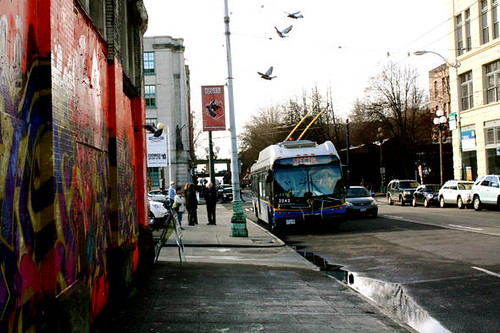 The bus Free Ride Area downtown will be no more as of September 29. Though the area does not reach into the Central District (it ends at I-5), your bus trips may still be impacted due to potential increases in loading/unloading times downtown. So do your part and get an ORCA card, which will help speed up transfer times. The more people with ORCA cards, the faster buses will be for everyone.

For more on the Free Ride Zone, there is a meeting Thursday (today) at Union Station’s Great Hall from 4-6:30 p.m. Our sister site Capitol Hill Seattle has more on recent transit news around the city:

The Ride Free Area for buses in downtown Seattle is scheduled to be eliminated on Sept. 29, 2012. At the same time, riders will begin paying when entering the bus for all trips.

These changes will help King County Metro Transit save money and preserve bus service. Sound Transit and Community Transit are also preparing to act on similar changes for their bus operations in King County.

The three agencies and the city of Seattle are hosting an open house to update the community and get feedback:

Metro is currently working with Sound Transit, Community Transit, and Seattle on an implementation plan for the Ride Free Area changes. This includes options to address transportation needs of low or no-income people who use the Ride Free Area to travel to essential support services in the downtown area.

The Sound Transit Board is scheduled to vote in June on charging fares for ST Express bus trips within the downtown area, consistent with current policy for Link light rail.

When a Metro, Sound Transit, or other transit bus driver signals that the bus is reentering the flow of traffic, other drivers must yield the right-of-way. The same goes for a streetcar or a Metro trolley bus. Many drivers do not seem to know this traffic regulation, or they choose to ignore it, but the penalty for not yielding is $124.

Consider this: a bus carries up to 80 or more passengers. If those passengers were riding in cars, there would be a lot more traffic and it would probably take much longer to get anywhere. By accommodating buses, we reduce congestion. When you think of it that way, a delay of a few seconds to let a bus go first doesn’t seem like such an imposition.

SDOT says it is working to reduce the number of stops where this kind of car-bus interplay is required but writes that there will “always be some ‘pull out’ bus stops.” Note this applies to the streetcar, too. But we won’t have to worry about that for a few more years.