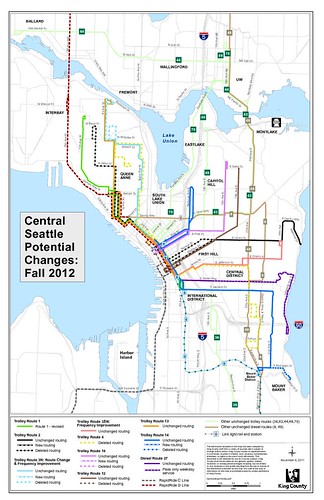 Metro released the narratives (maps to come) to  proposed revisions to original proposed changes yesterday afternoon, along with presenting a number of ways to comment:  http://metro.kingcounty.gov/have-a-say/projects/restructuring-system.html

The highlights to this for the  Central District are:

As soon as Metro releases the new maps I will post them and links to them.  The pictures here are a history of the stories that have appeared with first being a map of all the first proposed revisions to central routes.

Maps are coming, but at the moment the drop down menu at the right provides a narrative  on each of the current revisions to the revisions that were presented in November 2011.

The period for further comment will continue throughout February and will end February 29.  Metro will then prepare a recommendation for King County Council to consider in the spring probably April.

A number of methods to comment on the proposal are presented.

Meetings and open houses in or near or related to the CD:

FROM METRO:We’re still doing some testing on Internet Explorer and will be adding an interactive neighborhood map and proposed system maps in the coming days—so stay tuned!

We’re still doing some testing on Internet Explorer and will be adding an interactive neighborhood map and proposed system maps in the coming days—so stay tuned!

And links to others:

From Ashley at Metro : A media release is going out to neighborhood blogs and citywide media outlets momentarily and we will be sending out a series of other notifications tomorrow. You may also see us in the neighborhood putting up laminated posters in the bus shelters. Please stop by and say hi if you spot me struggling with a tape gun.From