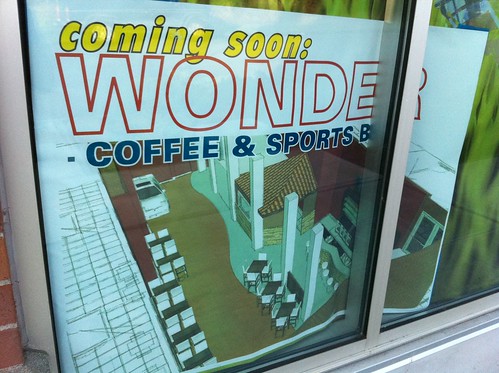 A coffee shop in the mornings and a sports bar at night, Wonder Coffee & Sports Bar will keep the lights on at 19th and Jackson when it opens in March.

Starting at 4 a.m., the shop will operate as a coffee shop with lunch food and wifi. At 4 p.m., it will close and switch over to dinner, which will go from 6 until 2 a.m., said owner Negsha Yassin. Yassin already owns several stores in the city including the Corner Store and Deli at 16th and Jackson.

Inside, the thing that might stand out the most is the body of a sports car sitting in the corner with a private seating area nearby. There will also be an outdoor patio space.

Yassin also said he hopes to have 50 beers on tap, in addition to the full bar.

“I want to compete with Seattle bars,” he said.

For dinner, the restaurant will serve “all different types of American food,” said Yassin. This includes everything from pizza to burgers and sandwiches. For lunch, it will be mostly cafe-style sandwiches and wifi (wifi is a food group, right?).

Yassin has been working on the restaurant for over a year, he said. Work will be wrapping up in the next couple weeks, and doors should open in March.