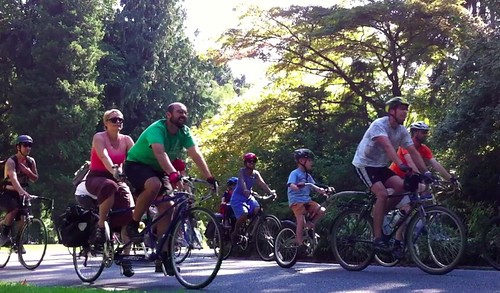 Finding a safe place to cross busy streets and dodging speeding cars are two of the biggest impediments to increased walking and biking, and groups from all over Seattle think they have the solution.

From North Delridge to Beacon Hill to Wallingford, citizen groups pushing neighborhood greenways — basically corridors of low-traffic residential streets with added traffic calming, greenery and safe crossings at busy streets — have been making the case to SDOT that fast, family-friendly walking and biking routes would be a cost-effective way to make their neighborhoods safer, healthier and more connected to their neighborhood destinations (schools, parks, commercial centers, etc).

Neighborhoods throughout Seattle are realizing their dreams for family-friendly walking and biking routes using Neighborhood Greenways – safe, low-cost and low-stress walking and biking corridors connecting people with the places they want to go. By adding traffic calming, safe crossings at busy streets, and extra trees and greenery, a network of low-traffic streets can be transformed into useful, park-like routes around the neighborhood.

In 2012, the Seattle Department of Transportation will fund or build Greenways in Wallingford, Beacon Hill, Ballard, North Delridge and Greenwood, with plans to continue funding community-driven Greenways through 2013. Let’s make sure Central Seattle – Central District, First Hill, Capitol Hill, Madrona, and Leschi – doesn’t get left behind!

Neighborhoods that have been successful at bringing Greenways to their streets relied on engaged citizens to build community consensus around routes and advocate for them during planning and funding processes. Following this recipe for success, we invite you to participate in Central Seattle Greenways, a community group dedicated to bringing Neighborhood Greenways to Central Seattle.

For more on what neighborhood greenways are (and how they work), here’s a good video from StreetFilms: