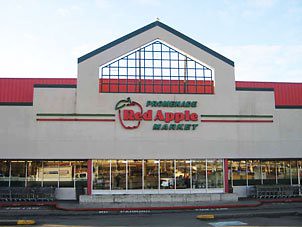 The Promenade Red Apple at 23rd and Jackson is getting a small healthy foods makeover, thanks to a partnership with the University of Washington School of Nursing. Starting Tuesday, some products will be shifted around and new signs will be installed encouraging young people to make healthy choices when buying food.

From Moving Together in Faith and Health:

Red Apple Market Promenade at 23rd & Jackson is joining forces with the University of Washington School of Nursing and six Seattle churches to promote healthier eating to children and youth. Store management has been working with the school’s groundbreaking project, Moving Together in Faith and Health (MTFH). On Tuesday, December 6, 2011, Red Apple will allow MTFH to make small changes which are intended to yield big results.

The changes include strategic placement of healthy, whole produce among the array of sweets and fried foods.  Bottled water will also be moved to more highly visible positions among the many sugar-laden beverages offered in the deli section. Where a teen may have been instantly drawn to a doughnut, brownie or bag of chips, he will find apples, bananas, pears and more.  At the same time these changes are taking place, Red Apple management is allowing for healthy fruit and vegetable floor decals to be installed. Those fun, child-friendly, active images accompanied by cartoon footprints will lead children and families to the produce department where they may pick out fruits and vegetables that they otherwise would not have chosen. The decals were designed by University of Washington Nursing Students, and printing paid for by the “Healthy Foods Here” initiative, which is part of the nationwide Communities Putting Prevention to Work program, funded by the American Recovery and Reinvestment Act.

In yet another effort to put a healthier face on Red Apple, store management has invited UW School of Nursing to have a healthy table display of information and eye-catching edible goodies at their holiday vendor showcase on Wednesday, December 7, 2011. Most of the other vendor tables will offer samples of traditional holiday foods like prime rib and desserts, but Dr. Doris Boutain of the UW School of Nursing says offering Red Apple shoppers ideas for healthy alternatives is a strategy that gets them and their children thinking.  “We were invited to have a table at last year’s event and parents and children were crowded at our table tasting the fresh fruit kabobs that were simply prepared with fresh fruit and natural yogurt dip. It is all about planting the seed.”  Boutain added that before the showcase last year, one child had never tasted a grape. “The child enjoyed that grape so much, that she just stood there and asked for more. We are thrilled that Red Apple sees the importance of promoting healthy eating and curbing the trend of childhood obesity and chronic diseases like diabetes.”

As part of the grant, Moving Together in Faith and Health,  Dr. Boutain has been charged with helping six churches develop healthy eating and active living policies in their churches. Those policies are now complete and approved by the churches, a feat some said was impossible. She also has the responsibility of facilitating relationships with community partners like Red Apple and Central Co-Op, resulting in changes in their stores that support the churches’ health policies and the vision for a healthier community.

About Moving Together in Faith and Health

Moving Together in Faith and Health is a University of Washington School of Nursing Project. By developing and implementing policies, six churches in Central and Southeast Seattle are expanding their historical faith and health legacies. The churches involved are Tabernacle Missionary Baptist Church, New Direction Missionary Baptist Church, Mount Zion Baptist Church, Immaculate Conception Catholic Church, Goodwill Missionary Baptist Church and First A.M.E. church.  They are becoming national institutional models for healthy eating and active living environments for children, youth, adults and families. Ultimately, churches will move together to transform neighborhood environments into places where faith and health opportunities, nutritious foods, and physical activity are affordable and accessible to everyone.   These activities by local cities and King County are supported by Communities Putting Prevention to Work (CPPW), a federally-funded grant to address obesity and tobacco use, two of the leading causes of death in King County.

In other Red Apple news, the store is hosting a holiday open house Wednesday, including photos with Santa. More info via Facebook.

21 thoughts on “Promenade Red Apple getting a healthy foods makeover”