The people squatting in an unfinished duplex at 23rd and Alder have a simple media statement, scrawled in pink highlighter at the bottom of a piece of notebook paper hanging on one of the few finished walls on the first floor:

There are homeless people. There are empty houses. That makes no sense.

And so the occupation continues, and the residents of 307 23rd Ave plan to stay indefinitely, working to fix the place up as a “Revolutionary household” run as a collective.

I stopped by and spoke with some of the collective members, who say they have not heard from the city, the police or the legal owners. When they first arrived at the house, occupiers expected confrontation. But that never happened, so they are there to stay as long as it lasts, they said. 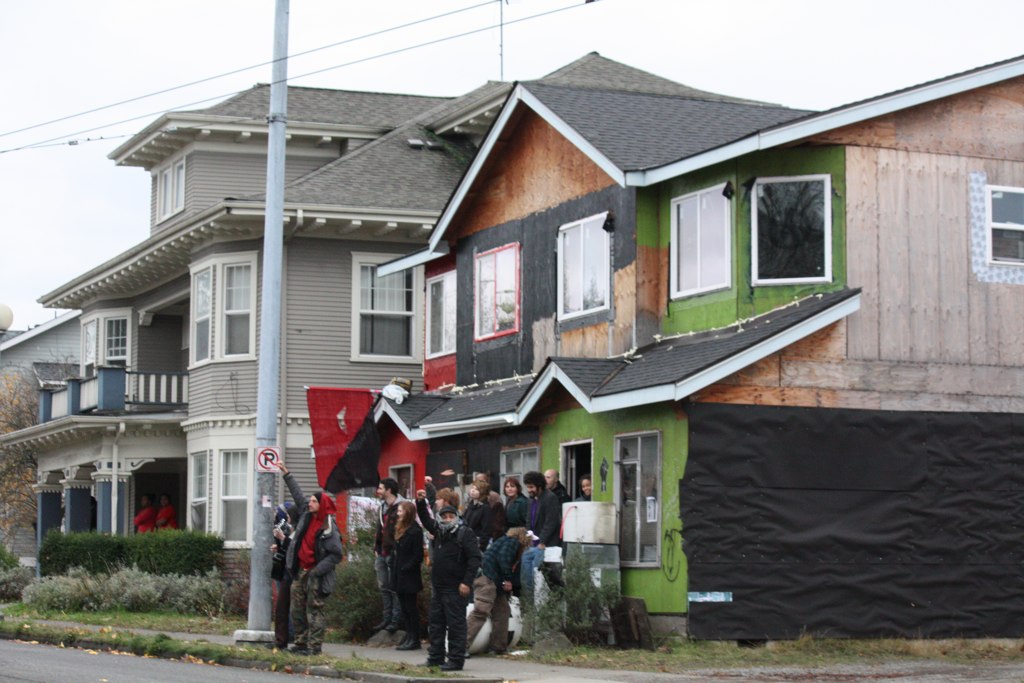 Attempts by CDN to contact the apparent property owner have so far been unsuccessful. County records list a Mr. Denmark West as the owner. Records also show that renovations to add a second story were started and promptly halted in 2008, when the building lost significant value during the housing crisis. It does not appear much if anything has been done to the building since.

From a posting to the Puget Sound Anarchists website:

We expected to meet resistance from the state, immediately, but the cops stayed at their cars and, before too long, left without saying anything to any of us. We expected them to come back. They didn’t. We expected pepper spray and hand cuffs and battering rams. It hasn’t come. That doesn’t mean it won’t. But we’re prepared. We’ve put a lot of work into our new home and we intend to keep it.

Since taking over the space November 19, the house occupiers have painted the outside of the building red, black and green. A banner hanging on the outside reads “Occupy Everything. No banks. No Landlords.” Anarchist symbols and flags are featured prominently.

The place also has a new name: Turritopsis Nutricula (see Wikipedia). That’s the name of a jellyfish that could, at least in theory, be an immortal being. The collective see this as something of a metaphor for the house. From the PSA post:

To perpetuate its life indefinitely, the turritopsis nutricula continually reverses its aging process once it matures and begins maturing again from the polyp state. To do this, the turritopsis nutricula transdifferentiates, meaning each of it’s cells are transformed into a new type of cell.. In essence, it becomes a whole new jellyfish each time. We taught that jellyfish everything it knows. Since taking this house, we’ve become a whole new jellyfish.

Of course, the takeover of the house has not been welcomed by everyone. Ted Howard, the principal of Garfield High School, sent an email alert to the school community warning of the group’s presence in such close proximity to the school:

Garfield Families – Garfield high school wanted to make you aware of a nationwide group – Occupy Seattle that is currently residing close to the school campus. They are living in an abandoned building that is on 23rd Avenue. The building is in the 300 block just south of 313 23rd Avenue. Occupy Seattle recently tried to hand out pamphlets and recruit members on the high school campus. Security and police asked the group to leave. Garfield high school is working with the Seattle Police Department to make sure that the group is not allowed to come on campus and promote their ideas. We wanted families to be aware of the group’s presence close to the school campus. Sincerely, Ted Howard – Principal at Garfield High School

A little over a week after this email went out, hundreds of Garfield students walked out of classes and marched to City Hall to hold a rally protesting budget cuts that hurt education. The march was entirely organized and led by Garfield students. But when the march began, members of Turritopsis Nutricula were outside the building cheering the students on.

There was also a lengthy debate about the philosophy and methods of the occupiers in the comments of our original post. Now past 250 comments, the story is by far the most-commented story in CDN history (the first couple days saw pretty engaged and interesting conversation, in this editor’s opinion). Community members expressed opinions all across the board. Some support the house, others support the ideas, but not the squatting. Others disagree entirely and urged neighbors to file complaints with the city through the Seattle Police Department and the Department of Planning and Development.

The Associated Press reports that squatting in vacant properties has become a tactic used by people aligned (at least to some extent) with the Occupy movements in Seattle, Portland and Oakland. However, things are going more smoothly for the Seattle squatters than in Portland, where several people were arrested while occupying a vacant home there.

For more from inside the house, Forrest from Hollow Earth Radio did some interviews with residents shortly after they took over the space. You can listen to a podcast of those interviews, posted to the Hollow Earth website.

Collective rules and Points of Unity: 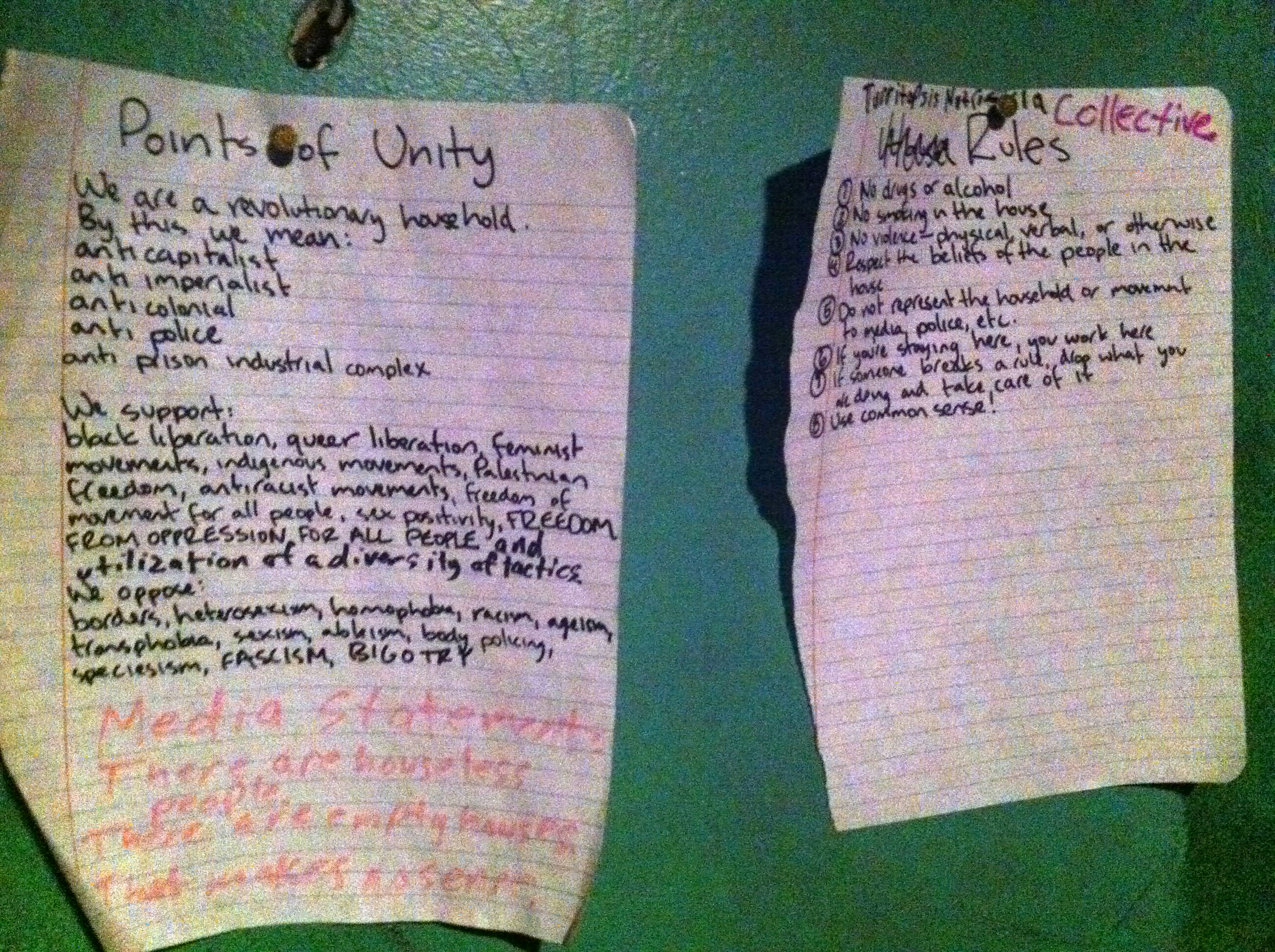