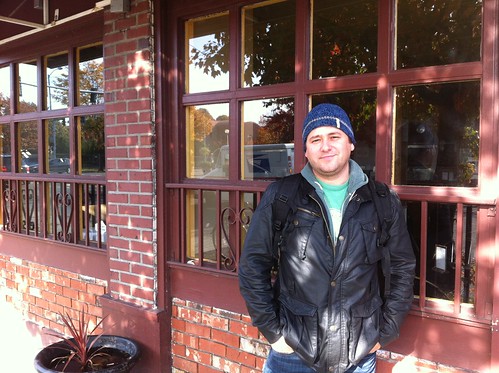 The people behind the Twilight Exit are opening a new vegetarian-focused bar and grill at 23rd and Union called The Neighbor Lady. The new bar is moving into the space recently vacated by Thompson’s Point of View, the decades-old southern soul food restaurant that closed in September due to about $14,000 in back taxes.

Thompson’s had a rough year and a half. Carl Thompson, Jr died unexpectedly in the spring of 2010 at the age of 51. Carl had been a centerpiece of the restaurant since it started serving up North Louisiana-style food in 1986. The restaurant stayed in the family with his wife Gail taking over.

Inspired by some European bars, the Neighbor Lady’s theme will be “urban brothel, but not too westerny,” said Stephan Mollmann. Mollmann is the owner of the Twilight Exit at 25th and Cherry (a CDN sponsor). He and Shira Bray, also at the Twilight, will be partners in the new venture.

“I said I’d never go into business with anyone, but she’s bad ass,” said Mollmann.

Work could start as early as this weekend, but there’s a lot of work to be done. The Neighbor Lady should be open in mid-to-late February.

“We’re taking our time with this one,” said Mollmann.

The bar and grill will serve predominantly vegetarian comfort food, though there will be a few meat options, said Mollmann. Where the Twilight Exit has mostly meat dishes with a few vegetarian options, he envisions The Neighbor Lady as the inverse of that.

The name comes from a bar in Amsterdam Mollmann frequented when he lived there, and he has wanted to use the name for years. In fact, Twilight Exit was close to being The Neighbor Lady.

On a recent trip to Europe, Mollmann took a lot of photos of bars to help guide the design. Though some some of his personal style will come, too, including “weird” lamps like the ones in the Twilight.

But the 1928 building is going to take a lot of work before it can open. The kitchen is going to get an upgrade, and a gated, boarded-up space just east of the main entrance will be walled-in and utilized.

Mollmann has had his eyes on opening a bar at 23rd and Union for a while (he described similar plans to CDN last year). He wanted to open the Twilight on the corner years ago, he said, and now that the Thompson’s space opened up, he saw an opportunity.

“I’m just filling a void at this point,” he said.