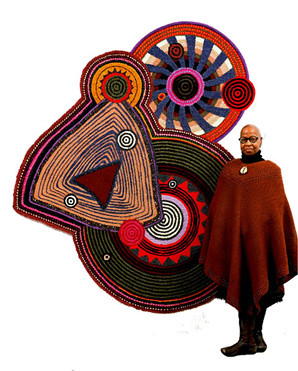 When Xenobia Bailey lived in Seattle, her name was Sherilyn. In the 70s, she left town to study art in New York. Now, her work is on display at the Northwest African American Museum in an exhibit called Xenobia Bailey: The Aesthetics of Funk.

In an interview with The Stranger, Bailey describes her life growing up in the neighborhood, being raised in Yesler Terrace, going to Garfield High School and styling hair at 34th and Union. From the Stranger:

Before college, nobody thought she was much of a student. At Garfield High School, art class consisted of students out in a cold trailer drawing their own hands—all year. Bailey stopped going.

“In college, that was the first time in my life I ever got an A or a B,” she says. “I’d been a D student when I graduated high school.”

At the University of Washington, “the whole world opened up to me.” She discovered ethnomusicology, the study of music and culture from around the world. She followed it with tailoring and millinery at Seattle Central Community College while costume designing at (now-defunct) Black Arts/West. And she did hair.

“It was this little barbershop on 34th and Union,” she says. “I saw a picture of these braids and said, I could do that.” She rented a chair and charged $15 a head—until her customers started defecting to a newcomer downtown, a Nigerian woman who charged $10, was faster, and could do all kinds of traditional braids. Bailey befriended the woman and left the hair business. “I learned: I’m not gonna do African ever again. I’m gonna do African American.”