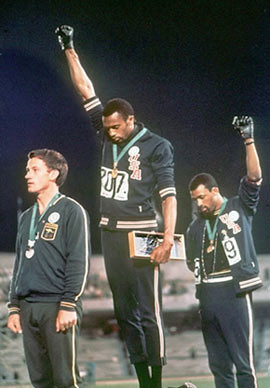 John Carlos, well-known for his iconic black power salute on the 1968 Olympic podium, will read from his new autobiography The John Carlos Story November 3 as part of the 2011-12 CD Forum season.

The reading starts at 7 p.m. at the Northwest African American Museum.

Carlos is an African American and the bronze-medal winner in the 200 meters at the 1968 Summer Olympics in Mexico City.

He went on to equal the world record in the 100 yard dash and beat the 200 meters world record (although the latter achievement was never ratified). In 2003, he was induced into the USA Track & Field Hall of Fame.

Carlos will be joined by Dave Zirin; who writes and speaks about the politics of sports. UTNE Reader named him one of ”50 Visionaries Who Are Changing Our World” and Press Action has twice named him Sportswriter of the Year. Robert Lipsyte says he is “the best sportswriter in the United States.” He is author of Bad Sports: How Owners are Ruining the Games We Love published by Scribner, A People’s History of Sports in the United States, part of Howard Zinn’s People’s History series for the New Press, and others.