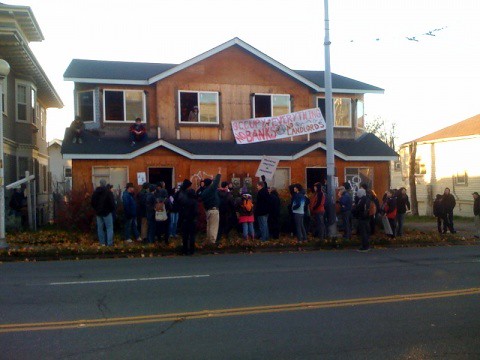 Members of Occupy Seattle have taken over an empty duplex at 23rd and Alder and plan to occupy it indefinitely, according to the Occupy Seattle website.

Occupy protestors say the house has been abandoned since the previous owner passed away, and that the group debated what to do with the space. Some even suggested “forming a work party to rebuild it for the community.”

According to the King County, the house is owned by Sander-Boman Real Estate Denmark West, who purchased the building in 2006 for $425,000. It was built in 1961 and renovated (at least partially) in 2008. Since then, work has stopped and it has been issued a series of DPD warnings including one noting the property was “open to entry via broken front window & crawl space” and another documenting “junk in yard includes mattresses, electronic equipment, bed frame, carpeting, furniture & other items.”

The house is across the street from Garfield High School.

Independent participants of the Occupy Seattle Movement have decided to indefinitely occupy an abandoned home in the Central District on the corner of 23rd Ave and E. Alder and are currently calling for support.

The occupiers came to the home during their march for the National Day of Action against State Repression of the Occupy Movement called for by the General Assembly in Oakland. They first marched past the juvenile detention center on 12th Ave and then reached the abandoned home.

A neighbor said banks took the home after the previous owner died several years ago and it has been uninhabited since.

Several occupiers in front of the home made speeches. They addressed how predatory lending, rent hikes, property taxes on homes, and police harassment have driven the working and middle class black community from the neighborhood. This has allowed banks, developers and other gentrifiers to move in.

After the speeches an ad-hock assembly decided to occupy the home and brainstormed ideas including forming a work party to rebuild it for the community.

In other Occupy Seattle news, Mark Root-Wiley posted earlier about an Occupy Seattle march down Yesler around 3:30 p.m. Marchers were chanting “Whose streets? Our Streets!”