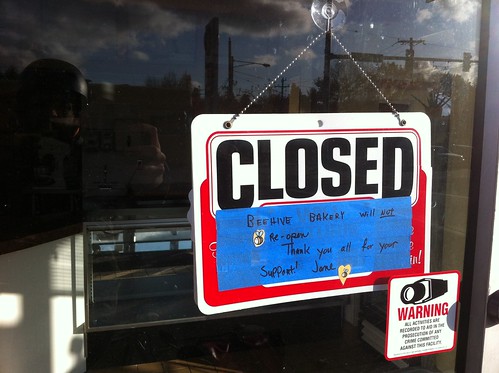 When it opened in August, the Beehive Bakery was big news for the troubled corner at 23rd and Union. After years of being shuttered, the old Philly’s Cheese Steak building was finally occupied again.

But just a few months later, the bakery has closed, citing a lack of foot traffic and city rules that prevented them from opening the shop’s drive-through window.

“It’s a great corner for car count,” said Jane Collins, who operated the kosher bakery and coffee shop with her husband Ken. But the shop was only getting about 40 people per day, which is not enough to keep it going.

“We had a lot of fun, and all the customers who came in were so nice,” she said. “If we had a full breakfast, lunch and dinner going, it would be different.”

They had hoped to use the drive-through window when they started plans for the bakery, but the old permits had lapsed and new city rules designate the corner as a pedestrian area. After a lengthy re-permitting process, which delayed the bakery’s opening, Jane and Ken found out that drive-through windows are no longer allowed. So they had to go forward without it.

Before the bakery opened, the building had been vacant ever since the 2008 murder of Philly’s owner Dejene Berecha inside the shop. The shooter, Rey Alberto Davis-Bell, was found guilty in 2010, but the space had remained closed.

In the long-term, property owner Ian Eisenberg is hoping the corner will be redeveloped into a mixed-use residential and commercial building. But like a similar plan for the vacant lot catty-corner from the Bakery, funding for such projects is stalled.

In the short term, it’s unclear how quickly the property will be occupied again.

“I don’t want to sign a long-term lease with anyone because it’s a potential development site,” said Eisenberg. “Now it’s a decision I have whether I want to lease it long-term or shutter it like the property across the street.” But Eisenberg said changes for the intersection are coming.

“I’m more encouraged now than ever for the future of the intersection,” he said. “It’s just a matter of when.”