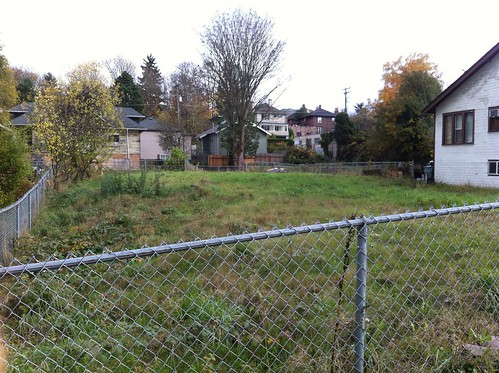 Urban farming collective Alleycat Acres has signed a lease for its second farm in the Central District, this time on the east side of MLK between Cherry and Columbia (JohnS posted about this earlier).

The lot has long been vacant, and the collective hopes to turn it into an active community farm similar to the one at 22nd and Union (remember how that lot looked just two years ago?). The group also has a farm on Beacon Hill, making this their third space since forming in late 2009.

The new farm will also be just a couple blocks south of the Green Plate Special farm at MLK and Union. When that farm went in, we joked that there were still a few vacant lots in the area that did not yet have urban farms. Soon there will be even one fewer.

For the past month, we’ve been working with the neighbors of the property and the owner discussing how we could all move forward with this 7,200 square foot parcel. Today, we all came together to make it official —  and a 3rd farm was officially born at 12:30 PM.

The property is located at the northeast corner of MLK and Cherry, a couple blocks away from our 22nd + Union space, and just a few doors down from our friends at Green Plate Special.

Over the next couple of weeks, we’ll be working on all the details of moving forward with this space. Be on the look out for community meetings so we can gather ideas + interested parties to come up with the official groundbreaking work party.

A huge thank you (and high ten) to Henery (our property owner) and Kiki (our neighbor) for believing in the work that we do. Many harvests await!

In other Alleycat Acres news, they have opened up registration for their spring fundraiser bike ride called Streets & Beets. It’s $15 if you register before December 15, and $25 after that. They are aiming to raise $25,000 during this year’s ride, which will allow them to pay some staff to keep the farms humming.