King County Metro has outlined the funding proposal for turning Route 48 into an electric trolley bus, and it involves a combination of local and federal grants, according to Bruce Nourish at Seattle Transit Blog. The King County Executive’s proposed 2012 capital improvements budget includes the project, but it will need to find outside funding in order to happen.

A month ago, Nourish proposed a plan that would split the 48 into two routes that would meet in the University District. Metro and the City of Seattle could then install trolley wires on the southern portion of the route, from the University to Mount Baker Station along 24th and 23rd Avenues. Much of the route already has wires (used by the 43), so it’s mainly the Central District and Mount Baker portions of the 48 Route that need them.

Total estimated cost to electrify the route is $13 million, much of which would have to come from the City of Seattle. From STB:

Unfortunately, before you stand up and cheer, there’s some bad news: this project is externally funded, and the funding is a moderately-long shot. The funding sources identified in the budget are a federal grant and the City of Seattle. For this project to happen, two things must happen: Metro needs to win a $6.9 million TIGER grant, and the city must pass the $60 VLF to afford the $9 million local match. $6.9 million is at the high end of the typical range of TIGER grants, but due to the excellent and long-lasting environmental benefits and shovel-ready nature of the project, this project should be very competitive.

The total of $13 million is rather higher than I would have expected based on the conventional wisdom of roughly $3 million per mile for uncomplicated segments of wire; Metro’s spokespeople were vague on why the cost seemed so much higher. I suspect that some of the cost might come from upgrades required to existing substations and other infrastructure on 23rd Ave, which may have changed little over their several decades of use; and also the cost of paperwork and compliance that always accompanies federal dollars.

It is unlikely the city will be able to come up with their end of the project funding unless voters approve Proposition 1 in November (full disclosure: I have been advocating for Prop 1 over at Seattle Bike Blog). Proposition 1 would increase Seattle Vehicle License Fees (AKA “car tabs”) by $60. According to the planned spending structure, nearly half the funds raised would be used for transit efficiency projects (like this one) and high capacity transit planning (like the Madison rapid bus project we wrote about previously). About 30 percent would go to general road system safety, repair and maintenance. About 22 percent would go to walking, biking and freight projects. 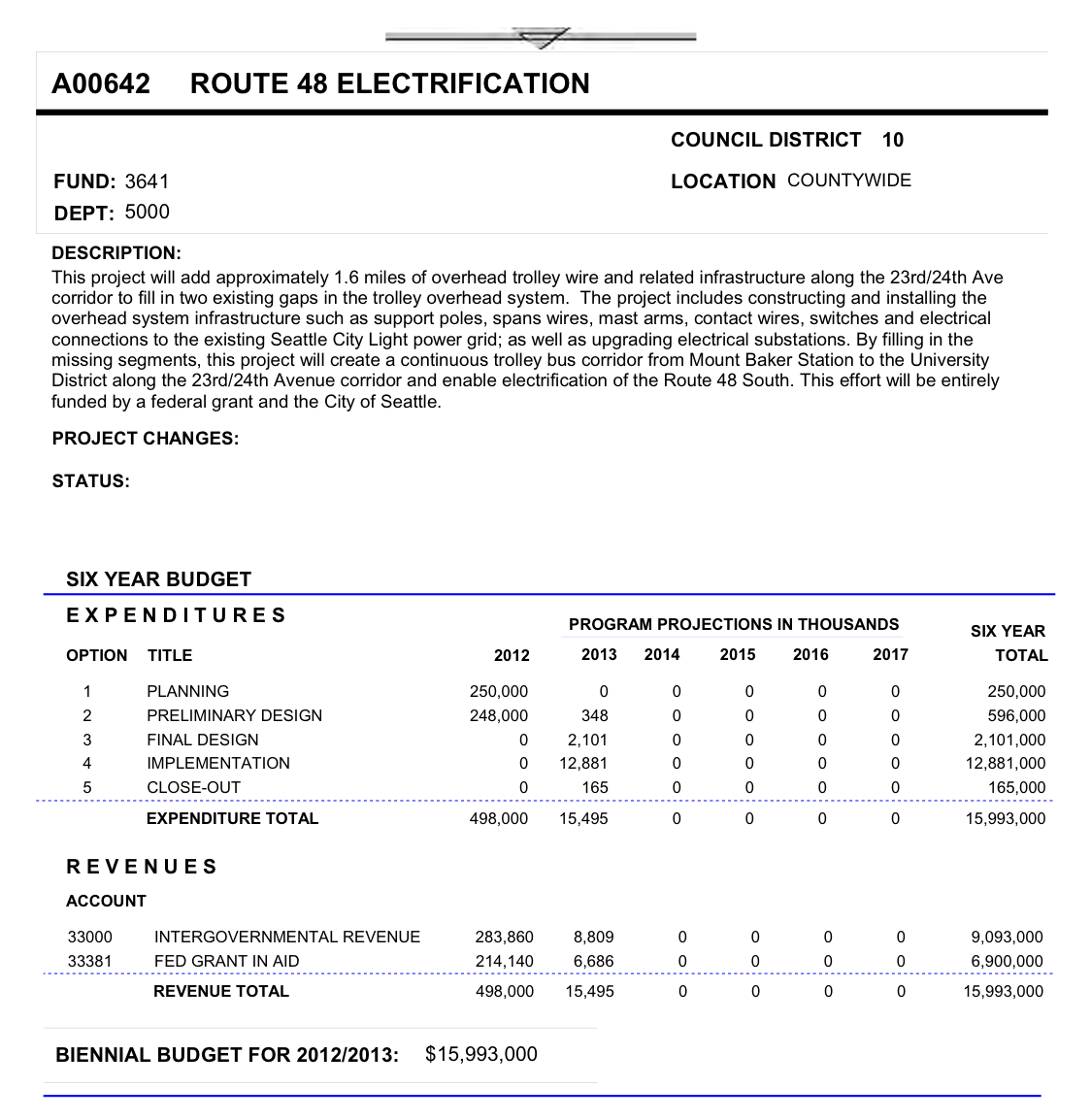