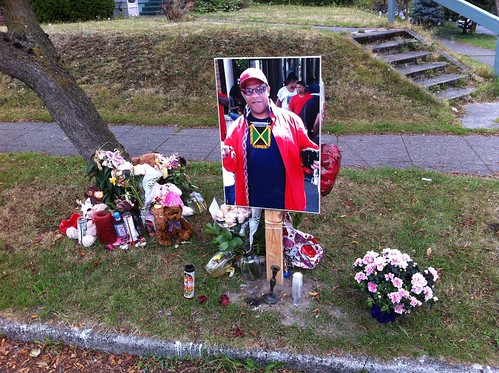 Police say they still have no suspects in the September 22 death of Shaun Harris at 26th and Jefferson. Harris was found on the ground outside a red Mercedes convertible after an altercation inside the vehicle around 6:30 a.m. He died from a severe head wound.

Friends and family of Harris set up a memorial at the location where he died and lined the nearby traffic circle with candles.

Jonah at Publicola has uncovered a few more details surrounding the incident, though the circumstances remain unclear:

Immediately following Harris’s murder, a witness apparently saw a woman, holding a set of jumper cables, standing next to Harris’s car. The woman left the scene before officers arrived.

Records also reveal that officers had actually stopped Harris in the South Precinct around 4:00 am that morning, just hours before his murder, with a woman in his car.

Police haven’t identified the woman as a suspect, but she told detectives that she had been with Harris before he was killed. She also told detectives she had called another woman to come pick her up in the Central District—just a block from the scene of the murder—half an hour before Harris was killed.

The affidavit says that as detectives were interviewing the woman, they noticed possible blood stains on the lower portion of her pants.

Police are still working on this strange case and have not named any suspects or made any arrests. A department spokesman said the investigation is “ongoing.

14 thoughts on “Publicola: A few more details in the killing of Shaun Harris”